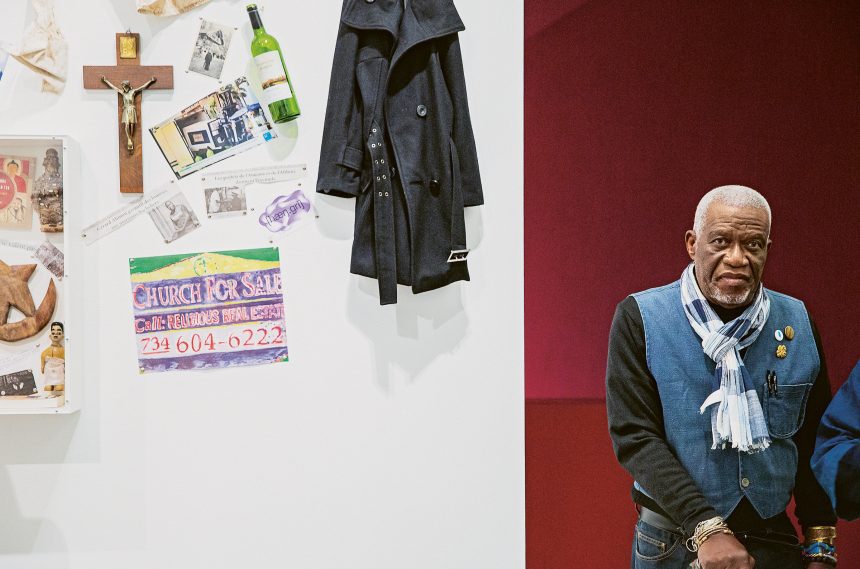 On the occasion of its 80th anniversary, the Ernst Barlach Haus is dedicating a large independent exhibition to the contemporary Beninese artist Georges Adéagobo.

Born in 1942, Georges Adéagbo has long circulated between Cotonou, Hamburg and the exhibition scenes of the world. The European art world began to consider him in the 1990s, and today he is among the most critical of African specialists.
He has participated in Documenta 11 and the biennials of Dakar, Johannesburg, Sydney, São Paulo, Venice, Lyon and Shanghai. Various exhibitions in important institutions over the last thirty years have made his name known in Europe, the United States, Africa, Australia and Japan.

These works are spatial paintings that stretch across walls and floors. They confront manufactured objects with ordinary objects from various societies, found objects, swap meet finds, floor coverings, clothing, records, banners, paper books and the artist’s own philosophical texts.
Renouncing Western frameworks of demand and order of meaningful value, Georges Adéagbo wraps himself around a perplexing trap of connections between things, images and thoughts. Their non-linear and branching concordance elicits an inquiry that can lead to various interconnections.

These plans are both individual and political. Continually bound to their particular setting, they find a set of experiences in politically centered issues and occasions of importance. Georges Adéagbo balances information about global struggles with an ideal world that is reflected in his own life and work.
His intercultural movement promotes a change in values, importance and thoughts.

In these recent works, one feels the expressionism of Ernst Barlach, which has left various traces in George Adéagbo‘s work – in the form of picture books, postcards or painted and sculpted interpretations made by craftsmen in Benin.

On the occasion of his 80th birthday, Georges Adéagbo extends this exchange and effectively integrates the collection of the Ernst Barlach Haus in an installation.

Georges Adéagbo’s tour includes some of Barlach’s major sculptural works, such as the Blind Tramp, Russian Love, Stargazer, Moses or The Meeting, as well as some 30 selected drawings.

Under the title “In the School of Ernest Barlach, the Sculptor”, Georges Adéagbo takes up Barlach’s existential themes of war and savagery, power and weakness, empathy and otherness, integrating them with his own views and kicking off a new exhibition open until February 19, 2023 and coordinated with Stephan Köhler.