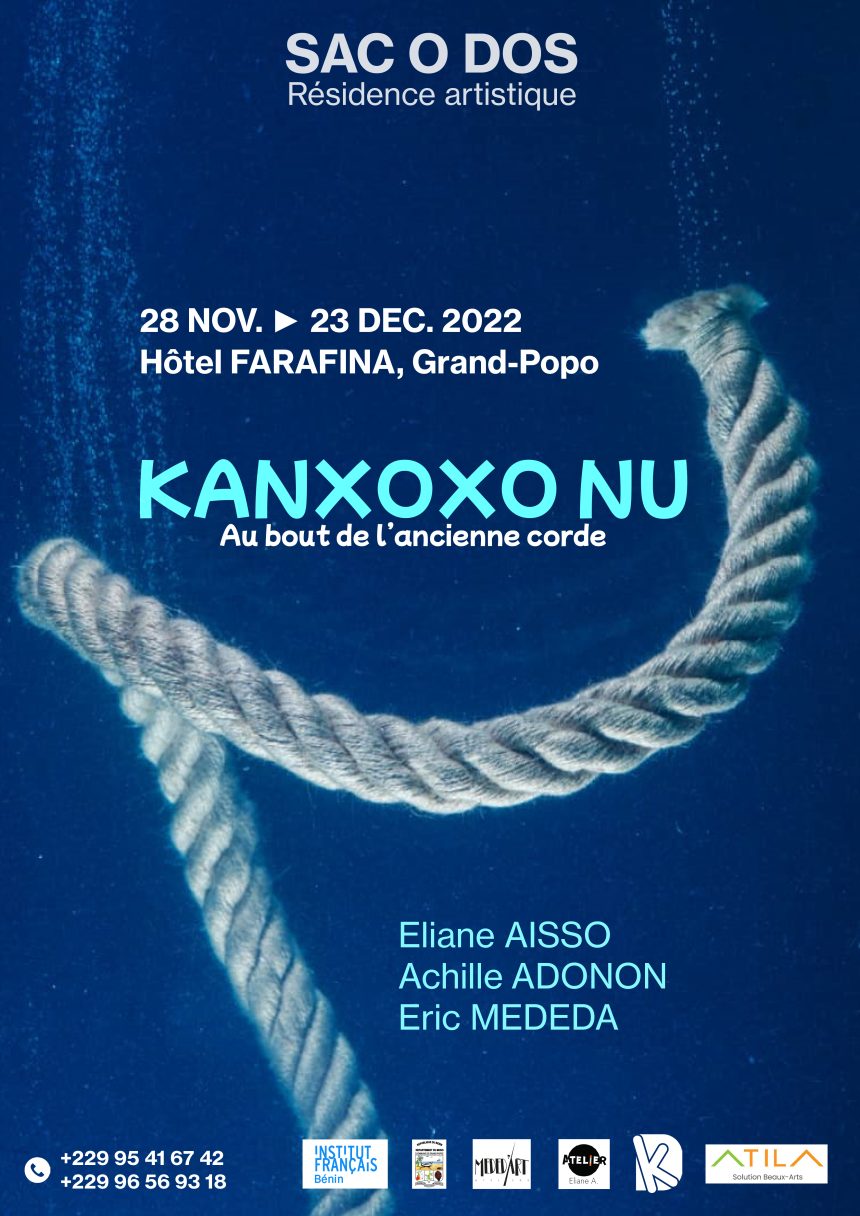 In creative residency since November 28, 2022 in Grand-Popo, three Beninese artists strengthen their artistic practices alongside Ludovic Fadaïro, one of the great figures of the Beninese and African artistic universe.

Members of the collective “Sac o Dos“, these artists, Eliane Aïsso, Achille Adonon and Eric Mededa intend, at the end of this residency entitled Kanxoxo nu (At the end of the old rope), to further densify their creations.

Echoing the old saying “it is at the end of the old rope that we weave the new“, this research and creation residency is part of a dynamic of exchange and sharing between the old and new generations. Far from claiming to rewrite the history of Beninese art, Kanxoxo nu nurtured, all the same, the ambition to highlight the work of young contemporary Beninese artists whose artistic practices are enriched by the teachings of master Ludovic Fadaïro.

Although their mediums vary between photography, drawing, painting, video and sculpture, they have, by mutual agreement, chosen painting to be focused and on the same wavelength in terms of learning.

“Paintings are often empty. We only see the subject when it’s not an illustration,” says their teacher, who invites his circumstantial learners to go far beyond.

During this month-long residency, Ludovic Fadaïro drew the attention of the “Sac O Dos” collective to the different elements involved in the creation of a work of art. The technique, the construction of the colors, the texture etc. are so many details which according to the master are quite as important as the subject. For him, a work of art must meet three criteria: beauty, goodness and depth.

Eliane Aïsso, Achille Adonon and Eric Mèdéda are encouraged to leave their comfort zone, to surpass themselves in order to find answers to various questions. Given that it is not enough to stay in place to create, the young people are often encouraged to go into contact with the world around them through walks and unannounced outings in order to nourish their vision.

Between currents of thought and notions inherent to their territory of belonging, they are equipped through two major themes : “Contemporary art of Africa: reality or utopia?” and “Artistic creation and vodoun in Benin, what adequacy? “.

Respectively animated by Philémon Hounkpatin, Doctor in Art History and Zéphirin Daavo, museologist and researcher in cultural anthropology at the University of Abomey-Calavi, these exchanges allow artists to better understand the subjects they address in their works.

The artists of the collective “Sac O Dos” also exchanged on the divinatory art “Fâ” with Gratien Ahouanmènou, journalist and author of the book “Quelques clés d’Ifa“.

Kanxoxo nu benefits from the financial support of the French Institute of Benin which also hosts the restitution of this research and creation residency in 2023.