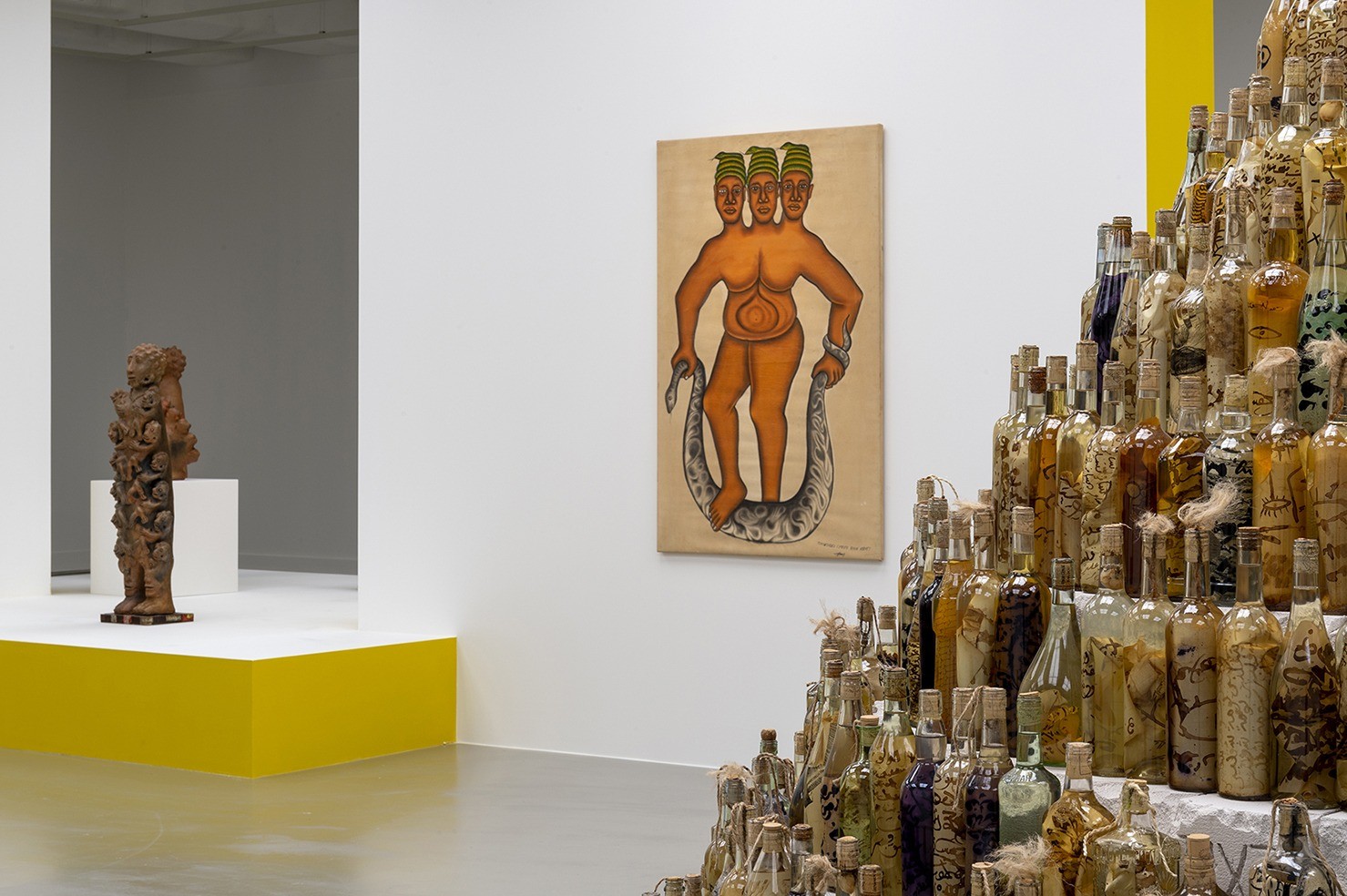 « Cosmogonies. Zinsou, une collection africaine », an exhibition that brings together a series of important works from the Zinsou family‘s collection, presented outside their premises. A space for the divulgation of contemporary art in Africa was created in 2005, in order to share the creativity of the African continent with a large audience.

The MO.CO. Hotel of Collections driven by the desire for an assured history in a field and a global extension has chosen 140 works from the series of more than 1,000 works of about sixty artists, regularly exhibited at the Museum of Ouidah to show an African look on Africa.

« Cosmogonies. Zinsou, une collection africaine », the space of a journey between seven worlds.

The exhibition « Cosmogonies. Zinsou, une collection africaine », offers visitors sculptures, photos, paintings and installations by 37 artists of different generations.
They suggest seven different universes of already classic artists, such as Frédéric Bruly Bouabré, Cyprien Tokoudagba, Malick Sidibé or Chéri Samba, and others present in the contemporary art appointments, such as Joël Andrianomearisoa, Sammy Baloji or Zanele Muholi, but also emerging artists such as Ishola Akpo or Aïcha Snoussi, in order to allow African contemporary art to defend itself more easily as a living reality outside its borders.

Questions about the oral tradition were widespread in Africa as well as the importance of unearthing important original copies. This part of the exhibition highlights many artists who decided to study the composed sign to restore ancient images, such as the Ghanaian contemporary Kwesi Owusu-Ankomah and his use of Adinkra, Emo de Medeiros who tried to mix generally recognizable symbols with conventional structures, the inventor of an alphabet Frédéric Bruly Bouabré, the theoretical themes of Esther Mahlangu‘s paintings that allude to the coded language painted on the partitions of Ndebele houses as a sign of obstruction after the loss of the Boers in late 19th century South Africa.

This is the second universe that questions the memory of families, positions and looks while bringing out both custom and proximity in the work of photographers of the 1950s, Seydou Keïta and Malick Sidibé.

It is this questioning that Joël Andrianomearisoa poses, impregnating these images with melancholy, coordinating in his installation the « Sè » pottery made in Benin by women and the voices of Jeanne Moreau and Maria Bethânia in a sound installation. Another clue to identity is the hairstyle, catalogued by Nigerian photographer J.D. ‘Okhai Ojeikere in a work comprising more than 1,000 images, which motivated Pauline Guerrier‘s sculptures, made of hair and twists of metal. Finally, Ishola Akpo, in her AGBARA Women series, honors African women rulers who are usually voluntarily forgotten by history.

Life as it comes

This passage is a questioning that tends the series « Sondage » of the sculptor Kifouli Dossou which represents the difficulties and problems of daily existence in the face of urban and rural realities of Benin. He is supported by Moké, probably the best chronicler of life in Kinshasa, who presents car collisions, markets, small and large events of daily life transformed into representations of the Congolese capital by the painters of the Kinshasa School. To finish with the story of an era with the studio photographs of Malian Adama Kouyaté or his colleagues Malick Sidibé or Seydou Keyta who equip themselves with props and scenery to try to recreate the most ordinary clues.

The question of presentation that suits the Sapeurs (of the Society of Elegant People and Ambiance) so well, is based on the idea that is constant in many portraits, like Cyprien Tokoudagba‘s sovereigns and princesses or Jean Depara‘s or Sanlé Sory‘s photos that tell the stories of people who have embraced the adolescent norms of American design transmitted by film and record covers, between liberation and adherence to the predominant models. Omar Victor Diop‘s series honors his archetypes with his models moored to custom and fully incorporated into a globalization of style or the play of archetypes found in Samuel Fosso‘s Tati series, and Chéri Samba‘s self-portrait which, imitates the pose, proper to a Western art history, of The Thinker.

A return to the problematic of our world by the artists Sammy Baloji and Ibrahim Mahama who bring out the device of abuse put in place by colonization, killing the specificities of the peoples, or giving rise to deceptive and toxic practices as Romuald Hazoumè on the traffic of adulterated fuel, generally called: Kpayo.

Chéri Chérin uses incongruity to ridicule a society that loses its qualities to greed. Gérard Quenum‘s works censure a society administered by a few great individuals who share the world, to the detriment of a population reduced to a few disappearing shadows. Finally, Aston goes further in his advanced point of view and tries to make us aware of a potential end of humanity that denies the gravity of the fiascos it makes.

The passage on mythologies is evoked by George Lilanga and his cunning legendary characters, the Shetani. Cyprien Tokoudagba and his motivation showed the pantheon of Vodoun and the symbols in the works of Romuald Hazoumè that allude to the art of divination Fâ among the Yorubas.

It is this same Fâ that Emo de Medeiros places at the center of his work Vodounaut; cowrie shells being used in this divinatory practice.

The meaning of allusions to an individual or current political history is apparent in the work of Lyndi Sales, and also the detour of an everyday object in the work of Sadek Rahim.

Seventh universe is the convocation of the uncertainty of the living, the natural and the elsewhere.
It decapitates the inner conflicts and puts forward this capacity to transform itself according to the soul that guides us or that we have decided to follow.

It is a focus on the rulers painted by Cyprien Tokoudagba who manifest themselves through their images or the tutelary powers that characterize them.

Zanele Muholi, Seyni Awa Camara, Rotimi Fani-Kayode are specialists who have shaped their future outside or against forced structures: LGBTQI+ activist for the first, woman banned from any social role in Casamance for the second, gay and shunned for the last.

Aïcha Snoussi has created a natural, non-genre language in her Anticodexxx, and seeks to rise above the lack of suppressed bodies to honor the disappeared in her new creation.

A Collaboration for the Outreach of Contemporary Art

The Fondation Zinsou is the leading private institution in Benin dedicated to culture and contemporary art. It is currently more focused on young talented artists who are not yet known in the art world. Created in June 2005 under the impetus of the Zinsou family, it aims to offer the public the opportunity to appreciate, examine, celebrate, and share art.

From Romuald Hazoumè‘s installations to Jean-Michel Basquiat‘s paintings, from King Behanzin to the Kings of Burkina Faso, from Jean-Dominique Burton‘s camera to Malick Sidibé, from Aston‘s installations to Mickaël Bethe-Selassié‘s papier-mâché characters, 36 exhibitions have been presented to the general public since its creation.

Its museum, dedicated to the collection, opened in November 2013, in a historic Afro-Brazilian monument in the city of Ouidah: the Villa Ajavon.

The Fondation Zinsou aims to be a springboard to a famous diffusion and general recognition of contemporary African art by approving as its first standard: total free access to all its activities.

Between free workshops for children, led by an expert instructor, it introduces them to contemporary art through inventive exercises identified with the subjects of current exhibitions. Sometimes these workshops are led by the artists present at the exhibition.

The Fondation Zinsou also coordinates many different activities such as educational and artistic workshops, competitions, events and conferences. It also supports and assists in social actions.

Today, it weaves a network of cultural and artistic exchanges with places such as the Musée du Quai Branly, the Botanical Museum, the Stanford University Museum, the Madeleine and Pyramides stations.

With a unique model, MO.CO. Montpellier Contemporain, is a public establishment of cultural cooperation dedicated to contemporary art.

It is an artistic ecosystem bringing together two exhibition spaces and an art school.
It is an institution conceived around the capacity for innovation and inventiveness of its team to produce and transmit content to as many people as possible.

These exhibitions address contemporary themes with social, political and cultural stakes and propose a dive into new domains of the imagination.
The group exhibitions and monographs are an opportunity to show artists without precedent for France, and to deliver new works in relation to local artists and industries.
Thematic exhibitions of the collections take into account rich pedagogical and academic projects, based on an understanding of the artistic, political and social contexts of the territories concerned.
They are conceived from public private collections discovered without precedent for France.

In parallel to the exhibitions, the MO.CO. offers a rich cultural program to the public in order to make contemporary art accessible to more people and to give its visitors, whether they are beginners or curious, the possibility to develop their basic reasoning and to discuss around the works and the artists.

Discover the artists of the exhibition “Cosmogonies. Zinsou, An African Collection” from July 3 through October 10, 2021 at the MO.CO. Hotel of Collections.