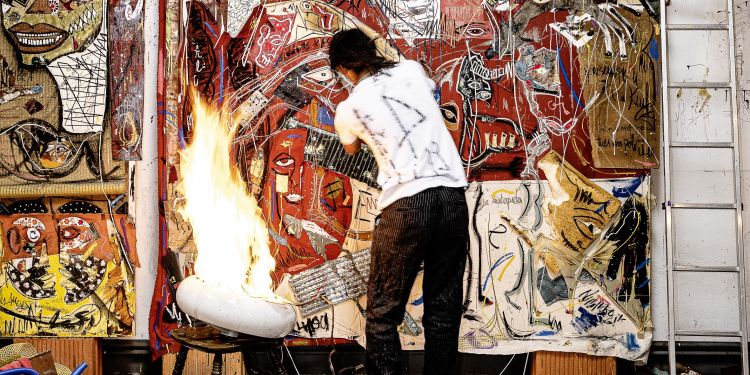 Alexandre Diop, a French artist of Senegalese descent, who explored an inner and outer conversation with his guide Kehinde Wiley.

According to this young artist, Kehinde Wiley tends toward a model of accomplishment. What they have in common is Dakar, where Kehinde Wiley created Black Rock, an artistic residency and where Alexandre Diop spent the summers of his young life, but also the dialogue with the masters, as well as with the contemporary world.

The exhibition “ LA PROCHAINE FOIS LE FEU, CHRONIQUES D’UN FUNAMBULE MÉTIS ” expands the artist’s view on points related to the character and representation of bodies. Kehinde Wiley and Alexandre Diop both work to give them virtuosity and subtlety. Dreams commonly driven by tendency, jealousy or fury that have a non-sectarian premise, while others combine into thick, almost suffocating manifestations.

Alexandre Diop speaks of struggles, of understanding his management of materials recovered during long metropolitan walks in abandoned places near his home. He then fills his backpack with pieces of metal, wood or plastic, which he sometimes cuts up with a shaper or scissors. Back in the studio, instead of a paintbrush, he uses a hammer and nails on huge sheets of wood that he then covers with paint.

The title of the exhibition “ LA PROCHAINE FOIS LE FEU, CHRONIQUES D’UN FUNAMBULE MÉTIS ” is taken from the American essayist James Baldwin, which for him tends to a figure of guarding minority opportunities through the compromise of differences.

The fire is also the life, the one of the fundamental men, that Alexandre Diop suggests in specific cases in his efforts to obtain particular effects.