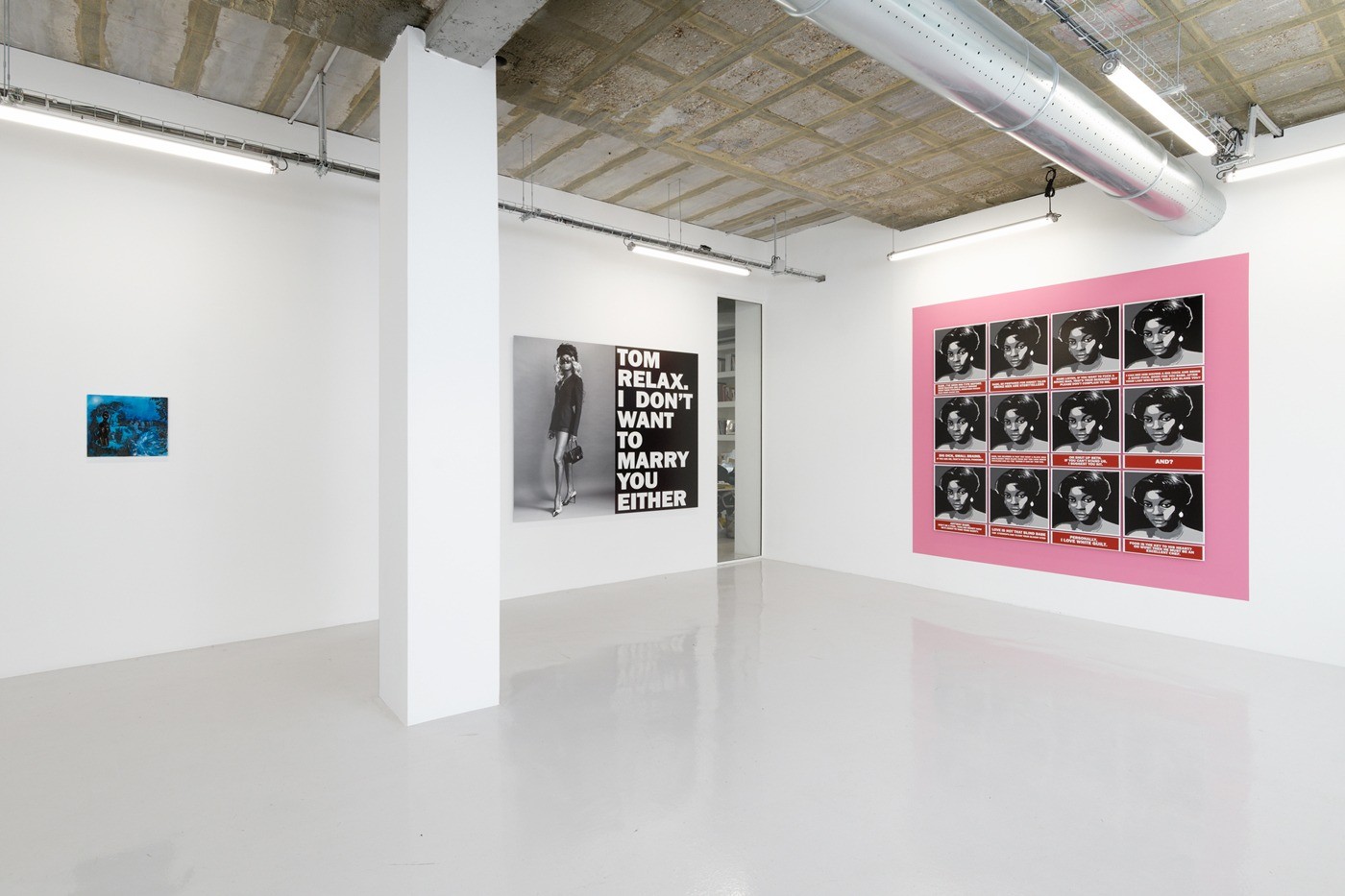 Until February 12, 2022 at the Galerie In Situ – Fabienne Leclerc, is presented the last exhibition of Otobong Nkanga who wanted in parallel to his project to invite four other African artists within the exhibition « Togethering ».

Born in 1974 in Kano, Nigeria, Otobong Nkanga is a visual and entertainment artist who focused on art at Obafemi Awolowo University in Ile-Ife, Nigeria and then at the École supérieure des beaux-arts in Paris. She was artist-in-residence at the Rijksasademie van beeldende Kunsten in Amsterdam, before obtaining a master’s degree in Performing arts at Dasarts in Amsterdam. Today she lives and works in Antwerp, Belgium. Otobong Nkanga‘s drawings, photos, installations, sculptures and performances grill the idea of region and the value placed on ordinary goods in various ways.

His work offers images that reveal a strong suggestive power. A wide assortment of media and materials structure works propelled by the land, its overexploited assets and the narratives that flow from them.

His art is organized at the intersection of the evolution of time and civilizations to go beyond our points of view, towards different environments, different economies.

The works of artist Otobong Nkanga, whose refined style may seem, at first glance, to have no unpleasant edges, demonstrate a strong power of reminiscence with representations of deconstructed bodies, disconnected appendages that are anyway connected by ropes, roots or branches.

These connections are plated images, but also a real organization of structures that are continuously reverberated through a wide range of media: drawings, artworks, installations, textiles, photos, sculptures, performances and sometimes even verse. Everything develops and associates itself, in all relation, like the chains of affiliation that the artist progressively assembles.

For his second exhibition at Galerie In Situ, Otobong Nkanga presents some recent works and also some more seasoned pieces that coherently link to his past projects.

Specifically, the two sculptures « Post I » and « Post II » created in 2019, whose stature compares to the size of the artist, are metal rides each deploying twelve aluminum plates on which images of scenes from around the world are printed.

These destinations are set apart by wounds, covered with much debris. The composition on wood « Borrowed Light – Appeasement » shows 3 interconnected arms connected by links to an emptied polygon. This manner with a mechanical and adapted style illustrates Otobong Nkanga‘s realistic work exceptionally well.

Some of the tapestry works made for the exhibition work with single parts of other more established woven works to give them another presence. Otobong Nkanga sometimes adds plants or oxidized metals, resonating ranges of nuances that mimic those of the ropes used to weave these textiles.

These shades are first seen in some of the artist’s drawings, demonstrating the exceptionally strong relationship she has with the materials that make her work possible.

Two installations made from hand-tufted carpets, to which Murano glass objects containing olfactory materials are attached by long strings, welcome the guest to rest and recharge.

In the exhibition « Togethering », the artist Otobong Nkanga had to welcome four African artists who reason in correspondence with his work. They are among others : Oroma Elewa, Bill Kouélany, Obi Okigbo and Adéọlá Ọlágúnjú for an exchange of feelings, natural links and connections.

At the heart of his work reflects on his own encounters, at different times, while examining the questions that arise from them.
Oroma Elewa nurtures thoughts that have social, cultural, political and racial significance.

Oroma Elewa is particularly inspired by a subset of issues concerning contemporary womanhood and aspects of her black persona, including: the transnational African cosmopolitan experience, the dynamic elements in the possession of a dark body while exploring the questions that emerge around the representation of that body : what is this body? What can it really do? How should it think? For what reason does it maintain this point of view? What spaces would this body be able to involve? What spaces would this occupation allow? In what ways might it take on the questions that concern it? How might it explore the limits of it, and so on?

Her project, « Area Babes and Ashawo Superstars », is a performance project that interrogates contemporary femininity through a cultural editorial. It is introduced through the lens of unique and rethought photographs from the brilliant Nollywood period and unfolds through a progression of characters – an intergenerational gathering of African ladies of the diaspora who explore and arrange life, philosophies, orientation, class and power in the 21st century.

It is a women’s liberation that exists outside of its regulatory boundaries; a women’s right that draws its experience and significance from the real factors of contemporary African women in the diaspora. Fundamentally, « Area Babes and Ashawo Superstars » is an exposé of the current time and place of transnational African women’s diaspora socio-residential encounters.

Bill Kouélany has been on various exhibitions and fairs. As such, the years 2002, 2004, 2006 were those of her really perceptible participations in the Biennale of Dakar. Without a doubt, in 2006, she will obtain both the Francophonie prize, the Montalvo Arts Center prize in the USA and a challenge to participate in one of the biggest exhibitions in the world: the la Documenta of Kassel in Germany.

In 2012, Bill Kouélany wore her curatorial hat in an interesting way at the Biennale of Photography in Bamako by presenting works made by her friend, the Cameroonian artist Goddy Leye. It is thus with this experience that she launches « LES ATELIERS SAHM » in 2012, in Brazzaville. This contemporary art center that offers assistance on several levels to young artists and authors of the territory.

Simultaneously, Bill Kouélany seeks his own vocation and makes his art a surgical tool, investigating, regularly realizing the possibility of difficulty in his work.

Organizing a tumultuous material, his work alludes to a personal investigation, scrutinizing the relationship to self and other. Her materials are chiseled, torn, fixed, they are the task of tearing and are capable as skins.

His installations are stunning, made of hand-hewn blocks or a combination of concrete and paper mache. Bill Kouélany is also an essayist and has recently published « Kipiala ou la rage d’être soi », published by Les Avrils. An epic self-portrait, a crossroads of contemporary Congo and an exhortation not to suffer.

Obiageli Okigbo is a British-Nigerian artist who is based in Brussels. Her experience as an engineer at Oxford Brooks University and the Architecture Association (UK) has had a lasting effect on her creative work, where experimentation with various materials and methods, for example, “Chinese ink on fabric”, oil painting and collage, has broadened her field of investigation.

In 2005, she established the Christopher Okigbo Foundation with the mission of safeguarding and researching the tradition of her father Christopher Okigbo, an artist who left the field during the 1967 Biafran battle. The link to her father’s idyllic work underlines the multidisciplinary approach that Obiageli Okigbo records in her work, in which one perceives the impact of Dutch patrons as well as Igbo mythology appointments.

After launching her career with an independent exhibition in Lagos in 2003, she continues to support her ties to her home nation by participating in contemporary art projects, exhibitions and fairs, such as the leading West African craft fair ARTX.

In 2015, she joined the Nigerian diaspora artists’ collective « NASUK », which organizes annual exhibitions, including the main commemorative exhibition « Legacies of Biafra » at SOAS London in 2017-2018.

She has participated in exhibitions in Belgium, the UK and Dubai, including DOCUMENTA 14 in 2017 and most recently performed at the National Theater in London in 2020. Close to her compositional practice, she has recently explored different avenues regarding photography, video and installation.

Her work is constantly in reflection with an inner gaze that manifests itself in the form of the female figure. The hidden subject of her work is certainly the self-portrait, rooted in my different character. It is both non-literal and conceptual; it is the feminine structure with the capacity of the goddess; nurturer, mother, darling, otherworldly provider, bringing out a disposition that spreads into tasks of time where the parts converge. Her way of approaching painting is that of an understudy who seeks the masters for all that she knows of the specialty; procedure, creation, light, shadow…

Adéọlá Ọlágúnjú is an artist who works with photography, video, sound and installation. Much of his art questions the self, memory, otherness, mending and the social scene.

She has developed a deep interest in the self as a space of demand. The self as being in the body, in the psyche and in memory.

In the body, since fabric conveys the human soul and as such, she chooses it as a vehicle of demand. In memory, since it is the means by which we process and reflect on our own internal narratives. In light of these intertwined parts, its inclinations extend to the climate, as it is ultimately the intelligent medium through which body and memory persevere. Adéọlá Ọlágúnjú‘s new work of examination and creation focuses on the abject as object.

She investigates the corporeality and materiality of waste (human and non-human) and rejection through misery by analyzing the ways in which items can create social outcomes, in their saving and ingenuity, but also in their obliteration and disposal.

Her work has been shown in festivals, museums and galleries in many countries. She has received grants and awards including the NRW.BANK Kunstpreis 2021, the Seydou Keïta Grand Prize for Best Visual Creation at the 2019 Bamako International Photography Biennale, the Young Art Support Amsterdam Award in 2013, and the Lagos Photo Festival Award in 2012.

Adéọlá Ọlágúnjú is a finalist in the 2019 Rolex Mentor and Protégé Arts Initiative and winner of the photography class at Forecast Platform‘s fifth release for 2020-2021.