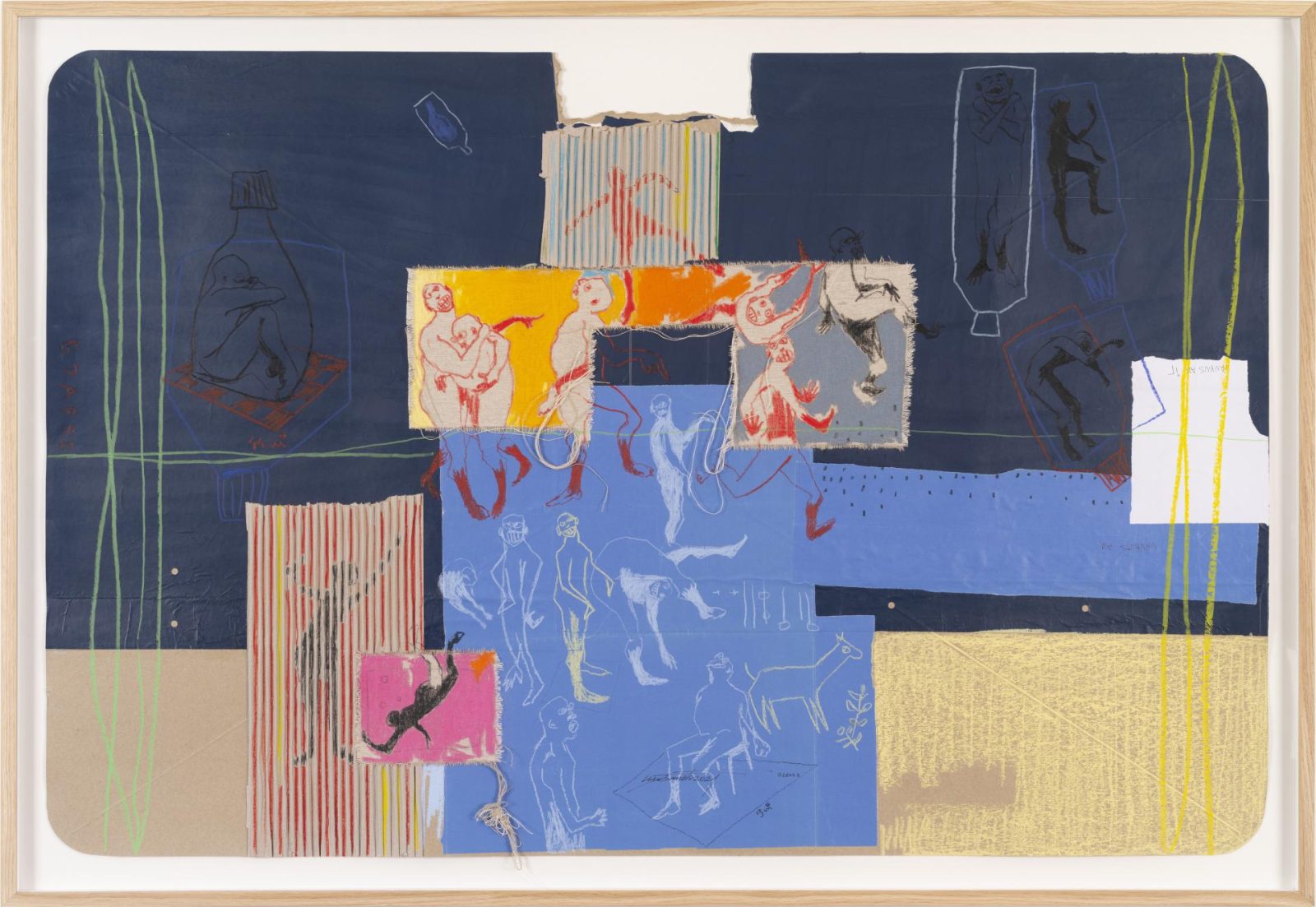 « L’IMPARFAIT ET L’IMPÉRATIF »: Open until June 12, the third exhibition of the artist Nú Barreto takes place at the Galerie Nathalie Obadia in Paris. It follows his previous exhibition « Homo imparfait » in Brussels.

Concerned by the degrading conditions of the population and the misery that prevails on the African continent, Nú Barreto dedicates his works to questioning the rulers of this continent about the unsuccessful relations maintained with the West.

Marked by the wounds and after-effects left by colonization in his country of origin, Guinea-Bissau, a former Portuguese colony, the artist offers for this exhibition, various works, drawings and polyptychs to express his bitterness about the difficulties faced by his country since its independence, which has led to instability and multiple coups.

His works, created with the help of imported objects, take on value to the detriment of the painted motifs. For the realization of his large formats, he adopts pure materials, but also recycling by using cardboard, paper, pieces of fabric and pieces of obsolete packaging. The artist shapes them as he pleases and through them, one can perceive the poverty or sometimes the architectural forms of housing or vulnerability. Despite his creations of urban scenes, sometimes showing roofs in poor condition, Nú Barreto gives a special touch to his drawings in pendulum and almost without precise orientation. In his drawings, he shows almost animated characters in an inclination like a reprobate in the court. All this to insist on the complementarity and brotherhood that should characterize human relationships, since man is « imparfait », and joining hands to move forward is « impératif ».

It is the search for such a solution that inspired the artist to work on the theme « l’imparfait et l’impératif ». His figurative representations show characters who depend on the bottles thrown into the sea, forced to renounce, ballot and calm. This work brings to life the scene of isolation imposed by the ongoing pandemic.

Condemning false illusions based on social rank and lifestyle mirages, this defender of African traditions creates symbolic works from a number of indigenous West African cultures. Addressing the situation of violence in which the country was immersed, the artist uses the color red to materialize traces of blood spilled. These are indelible bloodstains of a country marked by war and violence.

As for the color black, it symbolizes the artist, but also the misery and melancholy to which are dedicated the people victims of deficiencies with for example the memory of the load shedding to which the Guinean populations are confronted. However, some of the works of Nú Barreto let the softness emanating from the artist shine through; this in a poetic style through messages of hope carried by his sculptures of increasingly varied and optimistic colors.

Nú Barreto, an artist at the service of development in Africa

Multidisciplinary artist, Nú Barreto is originally from Guinea-Bissau. He focuses his work on the knowledge of the ideology of man and expresses most often the suffering and misery of his people.
Born into a family of several artists, Nú Barreto was introduced to drawing by his older brother. This passion led him to the study of photography. Known on the international art scene for the particularity of his works and his commitment, Nú Barreto was appointed to defend the colors of his country at the Universal Exhibition in Lisbon in 1998. Despite the coups d’état, violence and wars that disturbed the peace of Guineans in the aftermath of independence, as in many other African countries, the artist remains confident and believes that the African continent is promising. This is why he focuses his works on themes related to the evolution of mentalities, in order to contribute to the fight against poverty. He denounces the scourges such as poverty, suffering, discrimination, corruption that undermine the development of the continent.

Favoring drawing to express his talent, the artist who was initially a photographer is also gifted in wall installations, a channel through which he opines on contemporary African art. Through his mixed techniques, mixing drawing with collage without forgetting recycling, his paintings, photographs and videos transport the viewer into his artistic universe.

Present in major collections and institutions, Nú Barreto‘s works are exhibited in China, the Taipa House Museum in Macau, the Museo Capixaba do Negro (MUCANE) in Vitória, Brazil, the Smithsonian Institution in Washington D.C., and many other art venues around the world.

The exhibition “THE IMPARFECT AND THE IMPERATIVE” is open until June 12, 2021!