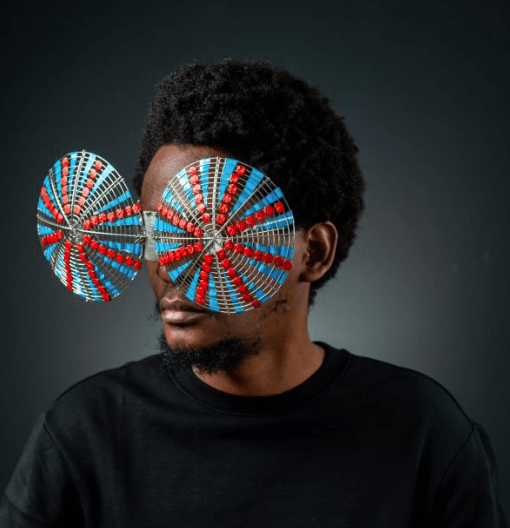 The exhibition “A Small World” is an exceptional project that was coordinated during the seven-month residency and includes works made during Cyrus Kabiru‘s visit to Venice from August 25 to October 31, 2021, as well as works made in his studio in Nairobi with Venetian objects that he brought back to Kenya.

The exhibition “A Small World” is open until October 10, 2022 and is enlivened by objects found in his nearby scene in Nairobi where Cyrus Kabiru met the city of Venice in a remunerative way, using items and materials tracked down to reflect both the city and its captivating style.

Cyrus Kabiru‘s chosen medium accentuates the idea of reuse and his nostalgic association with the objects that surround him.

Popular for his self-portraits and C-stunners, Cyrus Kabiru‘s work reflects his point of view, offering viewers an alternative arrangement of focal points.

Cyrus Kabiru’s work can be found in various private and public collections. Most recently, his work entitled “Miyale Ya Blue” was obtained by the Metropolitan Museum of Art in New York.

During the “A Small World” exhibition, the residency program includes hosting the new resident artist.