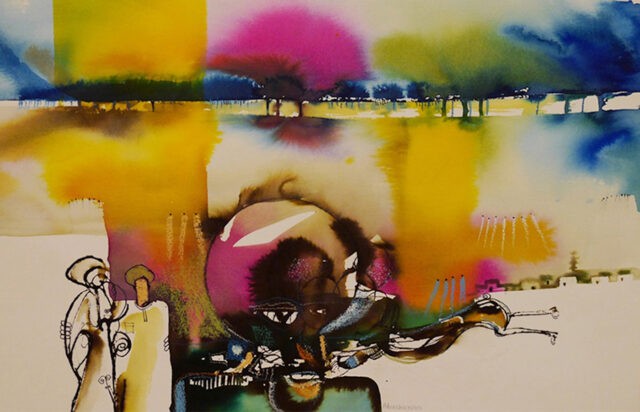 “A Retrospective of 30 Years” offers a brief overview of Abusharia Ahmed‘s vast and multi-layered oeuvre over a period of thirty years. The exhibition is open until November 6, 2022 at the Red Hill Art Gallery in Nairobi, Kenya.

The owners of the Red Hill Art Gallery have known Abushariaa for nearly 30 years and over that time have obtained an extensive collection of his work, some of which forms the basis of this exhibition.

These are works made in the mid-1990s, shortly after his graduation from Sudan College of Art in Khartoum, and later, in the mid-1990s, during his year-long residency at the Paa Ya Paa art Center in Nairobi with Elimo Njau.

His works from this period were semi-unique, beautiful, mixing media and rich in whimsical and drawn images of his Nubian culture and Arabic calligraphy.

In the latter part of the 1990s, he presented carefully explained ink drawings on paper and material and huge collages on paper.

A progression of solemn, brown-yellow obsolete examples on paper suggesting ancient cave compositions was produced between 2007 and 2008.

A huge scope of acrylic, mixed media on material is important for his 2008/9 series on the war in Darfur. Various works incorporate later canvases in oil, watercolor and mixed media.