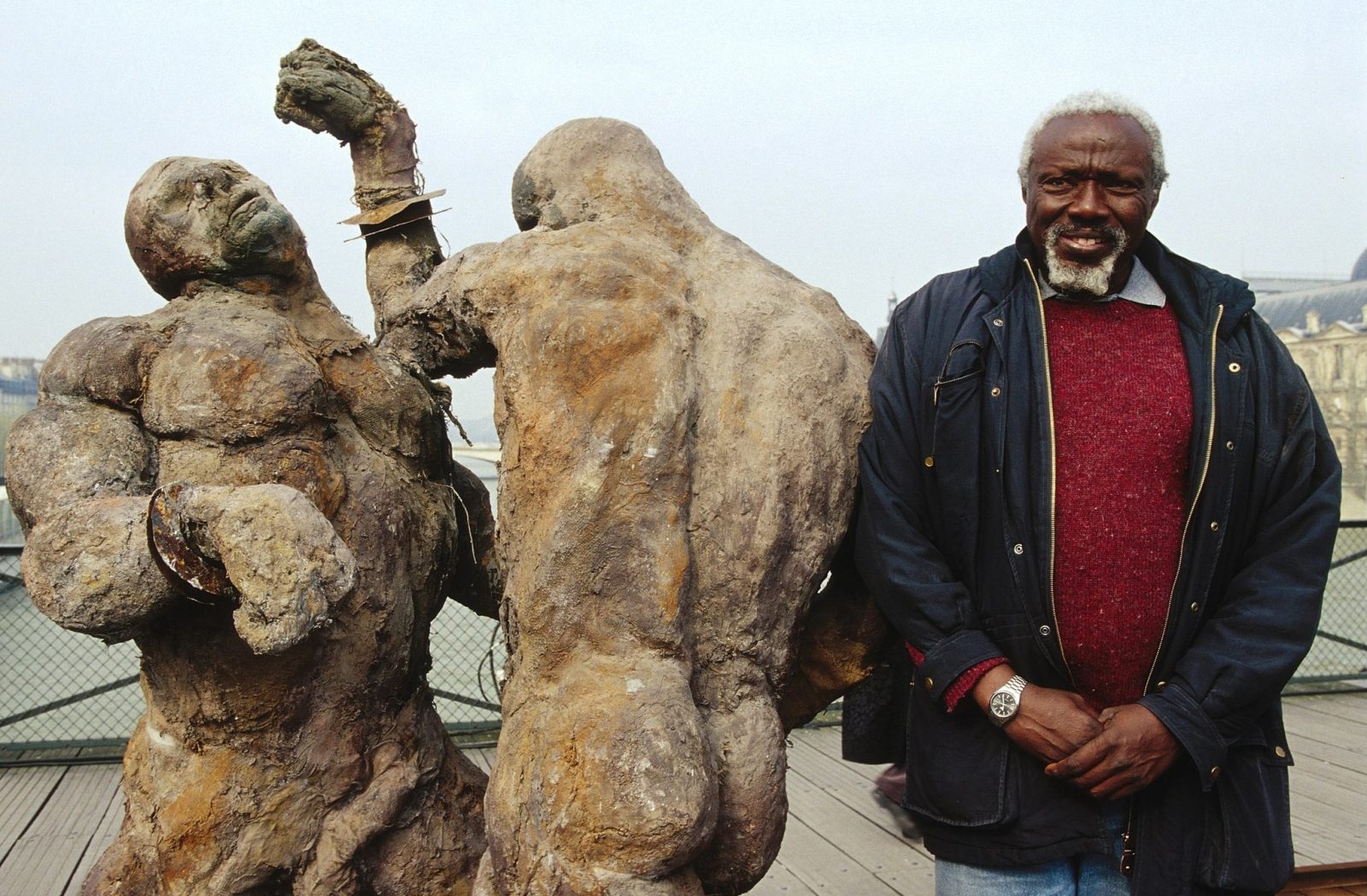 Ousmane Sow was born on October 10, 1935 in Dakar, the Senegalese capital. At the age of seven, he entered the French colonial school and then went to the Koranic school.

He received a strict education, and eventually adopted the virtues of his father, an edified and liberal Muslim who declined to be praised and considered the possibility of thinking.

At ten, Ousmane Sow was carving limestone blocks found on the seashore, and at seventeen, he entered a training school from which he graduated.
The death of his father, four years later, was his first big break in life. He then chose to leave, like other young people from Dakar, for Paris and embarked on a cargo ship to Marseille, for a long period of drifting.

From 1957 to 1961, he lived in Paris with a few small jobs and regularly visited students of the Beaux-Arts in whom he did not recognize himself. He briefly gave up sculpture and finished his exams as a paramedic the year Senegal gained its independence.

He then became a physiotherapist and tried to join the army to protect France, a country he loved, at the time of the officers’ coup in Algeria.

But finally, he opted for the Senegalese nationality, because he feels indebted to his country.

He became the main physiotherapist of Senegal, a specialist of the body, and he denounced the fact that anatomy is not taught in the Fine Arts.

Moreover, his works are the patient consequence of a long reflection on the human body. A body that he does not stop for a second to deform it, to triturate it, to twist it to what it must communicate.

Back in Dakar, he starts to carve again and ends up affirming his status as an artist by exhibiting a bas-relief at the first World Festival of Negro Arts in 1966.

He returned to France to work in the private sector. At night and on weekends, from time to time anyway, during the day between patients, he transforms his physiotherapist’s office into a sculpture workshop. He makes mannequins, elaborates surreal situations for himself and sometimes coordinates a small animation film.

In 1978, when he returned to the Senegalese capital for good, his life was increasingly devoted to sculpture. It is during the following decade that he will show the works that we know today.

For he ends up creating his own material, heterogeneous, unique, which will also serve him for his sculptures concerning the colored tiles that structure the floor of the relative multitude of floors of his house.

The year 1988-1989 marks the next significant break in his life. Ousmane Sow, now in his fifties, will turn to sculpture.

Around him, his first admirers began to worry about the dispersion and protection of his latest creations.

He then proposes the « Nouba », and the adhesion of the public is instantaneous.

In an unexpected way, Ousmane Sow put the spirit back into his sculptures, and Africa into the heart of Europe. With his Masai, whose colossal standing warrior has all the makings of a sentinel and messenger, he authoritatively stages the announced disappearance of sculpture.

In each of these works, whose uniqueness is described by the depth of the gaze, the engineering of the skeleton and the plane of the lips, he advocates the alarming personalization of a representation. But it is this particularity of his work that seems to beat and make his sculptures live.

He exhibited in Dakar, Marseille, Paris, Geneva, New York, Tokyo, Reunion Island… In 1992, the Dokumenta of Kassel installs him with authority among the great. The Venice Biennial affirmed it in 1995.

This sanctification does not prevent him from returning regularly to his studio in Medina, from where he delivers the « Masaïs », the « Zoulous », the « Peuls », the Indians and the horses of « Little Big Horn », a whole other humanity that travels by boat, by plane, by truck across the world.

In 1999, Ousmane is intrigued by the first occupants of the « Nouveau Monde ». On a seashore, he organized the famous skirmish of « Little Big Horn », which saw the Indians, including the Lakota Sioux Sitting Bull and Crazy Horse, destroy the seventh cavalry regiment of General Custer.

These Little Big Horn figures will be available, along with the Nuba, Fulani and Masai, at the incredible Pont des Arts review in Paris.

That same year, with the help of the Dapper Museum and the experience and skill of Coubertin’s initiators and skaters, Ousmane moved on to bronze. Some of his admirers expected his creativity to be lost; the opposite is true: bronze reinforces the plastic nature of his work.

In 2003, the sculptor went to New York with some of the works from the Battle of the Little Big Horn acquired by the famous Whitney Museum.

He thus ventures with his works, returns to Paris from time to time, finds his studio, his drawings, his soldering irons, or takes a break on the small island of Gorée. This place where, in the relatively recent past, it was slaves who went there… Ousmane Sow, made him leave a new humanity of African creativity.

How could he have imagined that he would be the first person of color to cross the Quai Conti to enter the Académie des Beaux-Arts, he who began sculpting in elementary school and whose first work was that of a small sailor carved out of limestone and exhibited on the school’s cabinet.

He who would remain tormented until his death by those energetic sculptures on which he worked the last few times, continually rotating a similar face, that of the Mad Emperor.

While Michel-Ange communicated the human condition in its insufficiency, that logical inconsistency between what gauges and what tries, between what can and what thinks, Rodin communicated it by the thwarted development, by what turns, he, Ousmane Sow, communicates it, beyond the obvious force, by what in some cases penetrates, by what is frequently speculated, by what happens.

Since with his art he does not give examples, but offers a greeting and a guarantee.