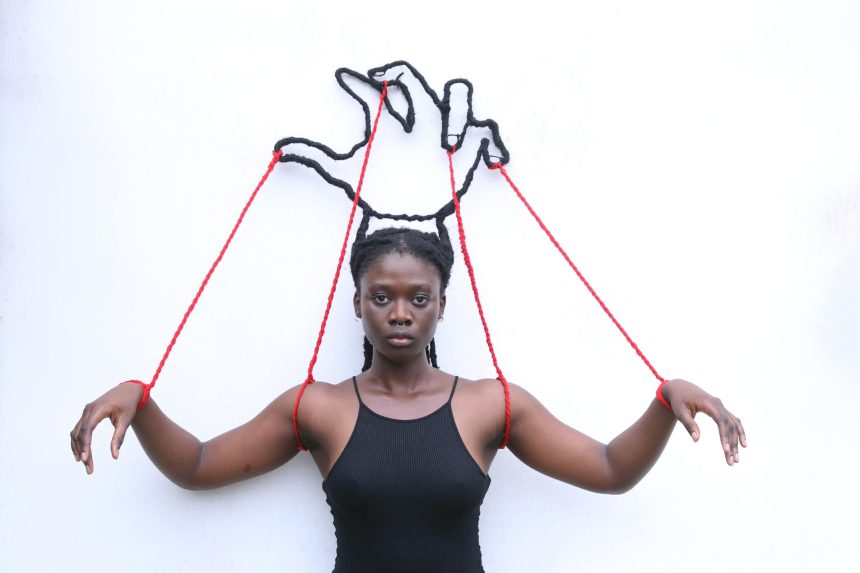 In Côte d’Ivoire, there is a young and wonderful lobbyist, a feminist at heart, who uses an unusual part of her body to lead this fight so dear to her heart: her hair! Mixing art, body and activism has no secret for her.

With millions of followers on social networks, exceptionally committed works, a much-appreciated autobiography, and a booming career, she has been challenging the codes of art and sculpture for several years. Female, black, young and talented, discover Laetitia Ky, an artist who makes us see hair in an unexpected way.

Reclaiming her identity and her body

Laetitia Ky was born in Ivory Coast in June 1996. Brilliant, she obtained her baccalaureate at age 15 and entered the National Polytechnic Institute of Yamoussoukro to study business. If the young woman is today solid, sure and free, it was not generally so. Laetitia Ky, through a few interviews, publications and her book, tells how, as a child, she faced the aversion of her body that drove her to eating disorders.

“I was, I think, 9 years old when I started hating my body image.  It’s hard when your (girl) classmates at school have already had their periods and you’re just a kid. They were all breathtaking when I was just a delicate young girl. The majority of them were also depigmented. So, in addition to the fact that I was very black, the standard of beauty was to be fair, but I was thin, I had nothing.“
Around thirteen, she sank into bulimia, and then, after a horrific experience in class, into anorexia. Her road to recovery began when she saw her mother’s concern about her dangerously low weight.

Laetitia Ky concedes that she could have done without all the things that concerned her: her thinness, her dark color, her frizzy hair, her presumption of monstrosity and her confusion, her quality of woman, taken in default by the norms and standards of the society. Around the age of sixteen, she returned to natural hair. The relationship she has with her body begins to change.

Towards the end of 2015, she comes across a post on an Instagram account of photographs of pre-colonial hairstyles of African women. Enthused, she concludes to do tests with her own hair. This is the beginning of the adventure that will make her become an icon of feminism and art in Africa.

Laetitia Ky‘s works are not to be put on a table, they are not to be taken home after a tight sale. They are on her head, the time of a pose and a diffusion on the Web. This is due to the raw materials that the artist uses in the conception of these works. Laetitia Ky‘s tools for production are wires, wool, needles, sewing or braiding threads and, of course, her own hair!

Hair is an old passion for Laetitia Ky. She learned to braid at the age of five, and has been taking care of her mother’s and sisters’ hair for several years. At the beginning of this artistic adventure with her hair, she had no particular intention other than to celebrate natural African hair with fantasy and inventiveness. Over the months and publications, more and more advanced, speaking, the audience of Laetitia Ky on social networks explodes. The feedback, experiences and positive testimonies that her publications generate make her realize the power of expression that her hair and her creativity possess.

The sculptures of the young activist become more engaged. She joined the #MeToo movement in 2017 with a sculpture depicting a man lifting a woman’s skirt. She does not hesitate to address sensitive topics see taboo as violence against women, discrimination due to gender, the perception of the value of women. She asserts her femininity with representations of the female body, bust, buttocks, genitals. The messages she wishes to convey are about themes that are dear to her: self-acceptance, body positivity, the environment, the defense of African identity, women’s rights.

To Vogue magazine, Laetitia said: “It is important for me to express my African heritage through my hairstyles. I use myself as a canvas to symbolize self-confidence and self-esteem. From my feminism to other causes I support, I use my work to address what I believe in. This form of expression allows me to be heard.” The young artist defines herself as an African feminist, arguing the specificities of the struggle on the continent.

Feminist and not only!

Today, six years after the beginning of this artistic career, the young woman is much more than a sculptor. A visual artist, she paints and does fashion design. In 2018, she launched a collection “Kystroy” that mixes printed fabric and frayed jeans. That same year, she received one of the three Jeunesse Francophone 35.35 awards in the Blog, Digital Influence and Media Innovation category.

Now an actress, she is starring in the 2021 film “La Nuit Des Rois” by Philippe Lacôte, shot in 2019, which won several awards including the Amplify Voices Award at the Toronto International Film Festival. In the fall, she starred in the film Disco Boy by Italian director Giacomo Abbruzzese. She entered the Guinness Book of World Records in March 2021 for being the person who did the most skipping the fastest with her own hair.

On April 5, 2022, she released her first book Love and Justice: A Journey of Empowerment, Activism, and Embracing Black Beauty, published by Princeton Architectural Press, in which she reflects on her journey and beliefs. In it, she talks about her childhood in the Ivory Coast, her strong family ties, her attachment to her African roots, her own journey of self-love, and her desire to uplift other women, especially African women. The book contains photographs of over 100 never-before-seen hair pieces.