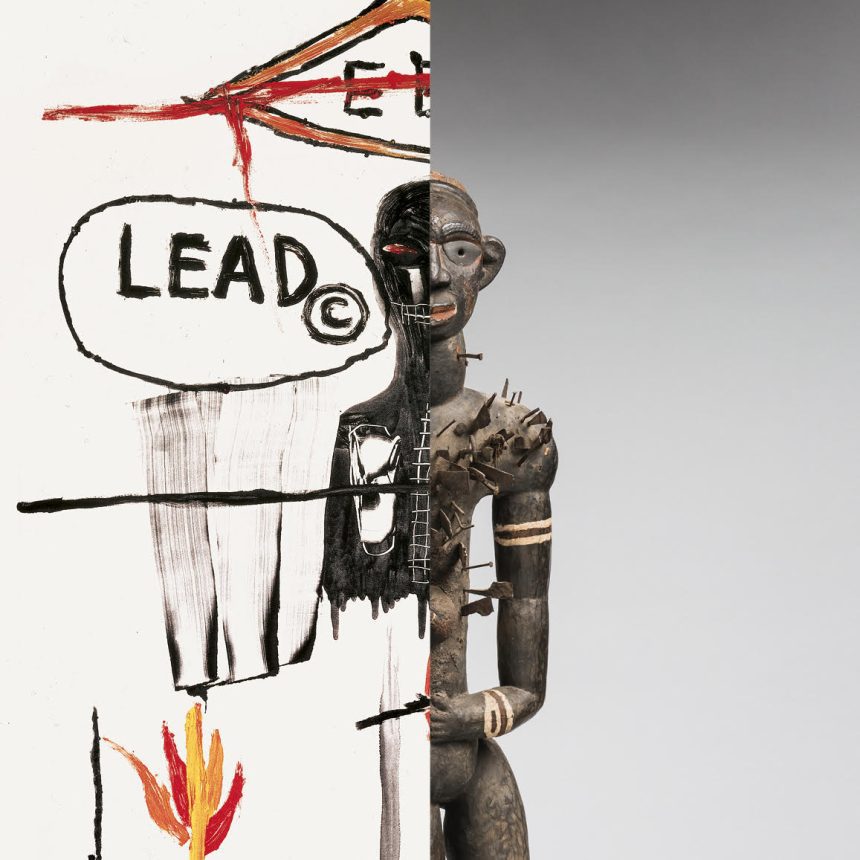 The exhibition « Résonance – Jean-Michel Basquiat et l’Univers Kongo » is an extraordinary examination that welcomes the guest to let himself be led by the feeling of accessing the essence of the conventional discourse that he establishes between the drawings of Jean-Michel Basquiat and the strong “Nkisi Nkonde” figures of the Kongo cultural circle coming from the Royal Museum of Central Africa of Tervuren.

This exhibition proposes a leap into the heart of the works and their spirit. About twenty surprising nail fetishes, human and zoomorphic sculptures have been browsed in the gallery’s collections and are presented to the general public. A selection completed by some specific loans to meet the challenges of the exhibition.

The scenography of the exhibition « Résonance – Jean-Michel Basquiat et l’Univers Kongo »  takes the visitor on an excursion that unfolds over the two floors of the brilliant seventeenth century hotel that houses the Gradiva Gallery.

In various works by Basquiat, we find sculptures such as figures pierced with spikes or waving an article in a mentality of strength, figures reaching with one hand towards the sky and the other towards the earth; literal wooden leaves covered with nails that present some similarities with the ceremonial practices related to the “Nkisi Nkonde“. Nevertheless, it would be fragile to point out other similarities between these two universes insofar as the similarity that one accepts to identify in specific works is, all in all, extremely interesting and does not involve any undeniable verification.

The expectation of the exhibition « Résonance – Jean-Michel Basquiat et l’Univers Kongo » will be to offer to the guests an encounter oriented towards the inspection of the consequence of the meeting of works whose great power of fire imposes itself to the glance.

Certainly, how to qualify otherwise than energetic the splinters of paper crossed by bodies and words drawn by the instinctive and vivacious stroke of Basquiat ?

How can one not feel in the same way the defensive powers that irradiate the extraordinary sculptures “Nkisi Nkonde“, marvels of expressiveness and formal creation that allude to the complex mystical universe of the Kongo peoples ?

Basquiat, a fantasy of Africa

Born in New York to a Puerto Rican mother and a Haitian father, Jean-Michel Basquiat spent his childhood in Brooklyn. Self-taught, he began to frequent exhibition halls at a very early age, to look at a lot of things and to pay attention to music.

An attentive spectator of the world and voraciously curious, he ingested everything from boxing to film, jazz, blues, hip-hop, comics, writing and art history. As a black resident in a white, moderate America, the young man witnessed and experienced racism, segregation, and mistreatment of the African American population on a daily basis.

His Puerto Rican origins led him to verify all the experiences and customs of the African diaspora, repetitions that will constantly resonate in his work.

In 1983, reading “Flash of the Spirit: African and Afro-American Art and Philosophy” by Robert Farris Thompson so upset him that he paid tribute to him by titling one of his works “Flesh and Spirit“. This reference book shows what the African civic settlements meant for the stylistic, social and other customs of blacks in the United States, but also throughout the Americas, from Cuba to Haiti, Mexico and Brazil.

The Kongo world was one of the interests of Robert Farris Thompson, whom Basquiat met and had many conversations with about it.

In 1984, another social and creative shock shook Basquiat at the controversial exhibition “Primitivism” at MoMA, which proposed to establish links between the avant-garde of the mid-20th century and ancestral or crude art. Among the objects on display is a Benin sculpture from the Kerchache collection, which Basquiat addresses.

His real experience of Africa took place in October 1986. At the age of 25, Jean-Michel Basquiat was welcomed by the French Cultural Center in Abidjan to exhibit some of his work. The American painter took advantage of this excursion to go to the north of the Ivory Coast, to Korhogo, a city where sculpture has kept all its mysterious power. Basquiat left with the desire to return to these lands, a fantasy that he did not understand, since he died in New York on August 12, 1988, the day before his flight to Abidjan…