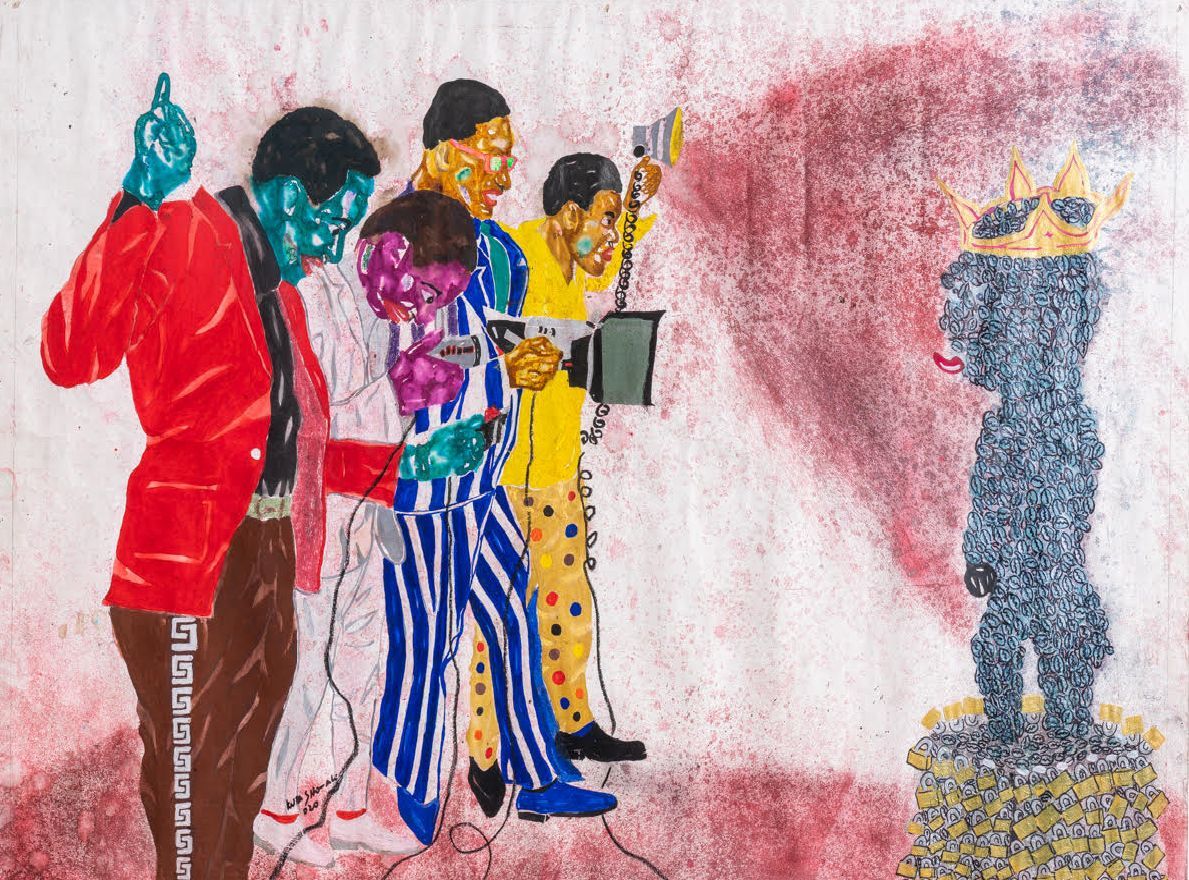 Foreign Agent contemporary art and design, the Swiss gallery that has the desire to expose Africa differently presents « Masolo ».

« Masolo », which would be described as the discussion as well as the narration in Lingala, one of the main dialects spoken in the Democratic Republic of Congo. Foreign Agent contemporary art and design has the desire through this exhibition to initiate a discussion across narratives and societies, where each of the artists questions – regularly using collage with different elements to produce stories that reveal to us another kind of history, one that praises the carnivalesque, the hybridized and the underappreciated.

But as with most things Congolese, always with humor. In the exhibition « Masolo », identity, relocation and the amazing tradition of King Leopold are analyzed and deconstructed by Kura Shomali, Maliza Kiasuwa and Joycenath Tshamala.

These artists use conventional Congolese elements, such as Luba caryatids and other objects of power, to feature prominently in the narratives as evidence of strength.

Artist Kura Shomali incongruously discovered our perplexing interest in the arrival of looted African artifacts, while Maliza Kiasuwa uses the striking elements of traditional African craftsmanship to Africanize old European engravings of average white figures, establishing a personal discussion between her European and Congolese predecessors. Then in Tshamala‘s work, these pieces restore nobility to the victims forgotten by King Leopold, currently represented as saints.

Kura Shomali‘s work is an urgent response to the turmoil, agitation and fervor of buzzing Kinshasa. Both skeptical and entertaining, he energetically appropriates images of outstanding African photographic artists such as Samuel Fosso, Sammy Baloji and Malick Sidibé, as well as images of mainstream society, Mick Jagger, John Cougar Mellencamp, Bodyz Kingelez and others.

Maliza Kiasuwa, of Congolese and Romanian descent, addresses issues of character and ancestry through painting, sewing and arrangement, returning to old inscriptions addressing hard-bellied white paternal progenitors and reconsidering them with highlights of African art in a work of comfortable miscegenation, suggesting quirkiness.

Joycenath Tshamala addresses issues of migration, through the series Record of Waiting, which deals with the regulatory mass migration of Congolese, lining up in airport terminals to be prepared, with their visas at hand.

Joycenath Tshamala works with extremely sharp corroded steel – the rust ordering the tumult and entropy and the edges addressing the cutting and removal of people leaving for Europe, often removing all ties to their families.

His other series examines the restoration of human pride – an attempt both to uncover the barbarities executed under King Leopold and to repair the terrible wounds endured by swarms of obscure and forgotten Congolese, by seating the mutilated victims on Caryatid stools, usually kept for royalty.

The exhibition « Masolo » is open until November 06, 2021 at Foreign Agent contemporary art and design.