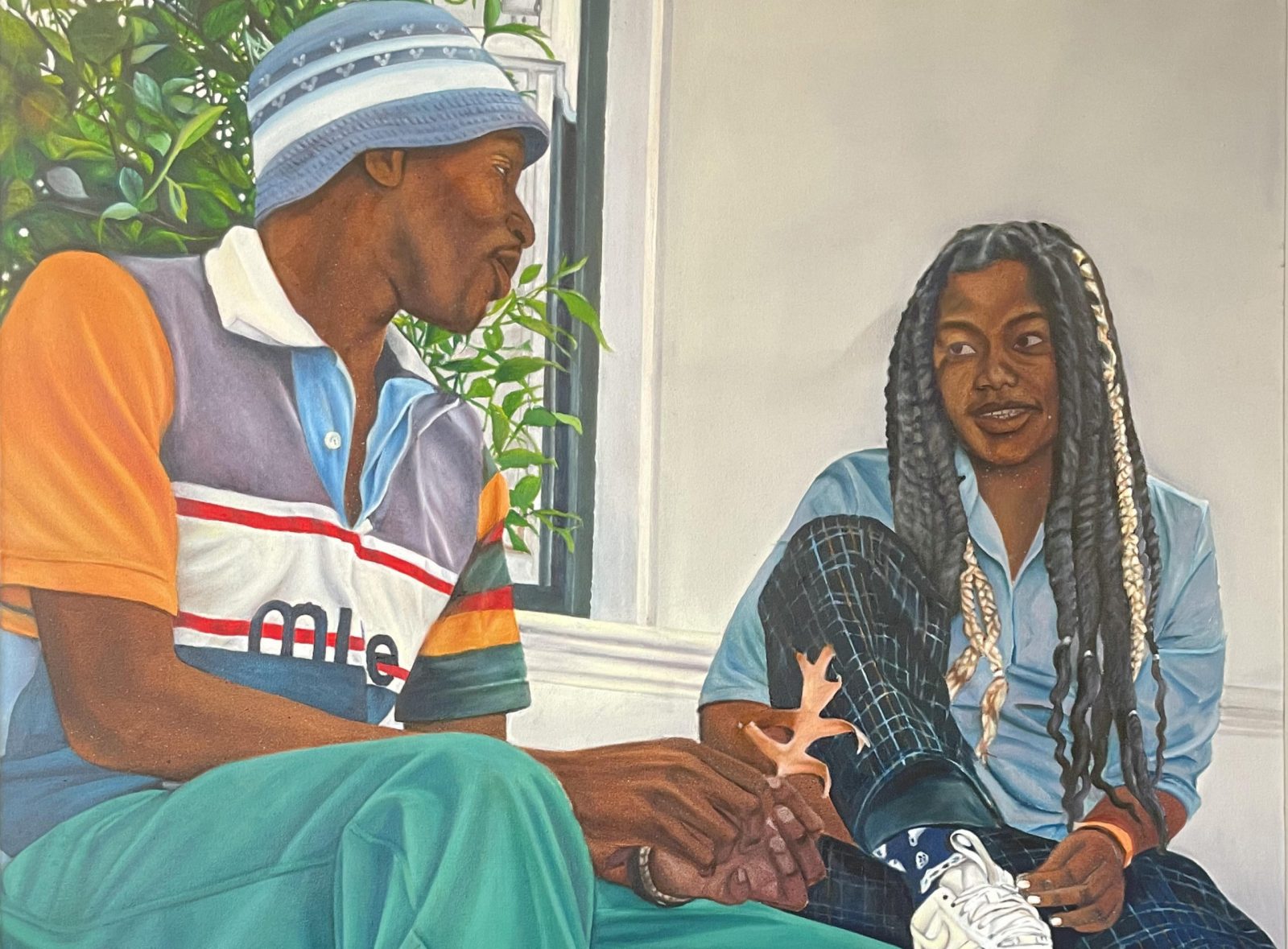 The 31 PROJECT is pleased to offer at the 31 lament de Seine in Paris the exhibition « Induku Enhle Ikhiwa Ezizweni, L’éclat des ailleurs », with the artists Aviwe Plaatjie and Willow Evann until March 5th 2022.

The exhibition « Induku Enhle Ikhiwa Ezizweni, L’éclat des ailleurs » features the artworks of Aviwe Plaatjie, a South African artist based in Cape town, presented without precedent in France. These works of art will exchange with the sculptures of Willow Evann, visual artist, dancer and photographer, student of the Kourtrajmé school, exhibited at Centquatre in Paris in 2020.

« Induku Enhle Ikhiwa Ezizweni, L’éclat des ailleurs » is a discussion between two artists, brought into the universe of their usual exploration around the representation of the black figure by the approach of the portrait for Aviwe Plaatjie, and the scrutation of the material, the shading and the computing for Willow Evann.

« Induku Enhle Ikhiwa Ezizweni, L’éclat des ailleurs » is a Xhosa adage that praises the blending of societies, and summons the magnificence of the distant, that which is molded outside of our local regions. From different continental perspectives, each of the two artists questions our views of the world’s side and attempts to depict those “shards” that lead us to new regions.

A shard can be the part of a body that breaks, as well as the vicious agitation of a material that breaks, but it is also this splendid light that sparkles and draws the attention to different horizons.

Aviwe Plaatjie, born in 1988, lives and works in Cape Town, South Africa. He is a painter and printmaker who portrays himself as an eyewitness to his region, capturing his family, companions, and neighbors in their daily climate. He paints these close-up snapshots of a discussion between two people, a subtle delay on a flight of stairs, the joy of flipping through a magazine or a solitary fantasy with his eyes fixed on the window. Aviwe Plaatjie offers a silent vision of the occupants of Khayelitsha, where he lived and brings a suspended time in his works conducive to reflection and listening.

Aviwe Plaatjie sends intricate foundations around her figures and pays particular attention to the subtleties of interiors, textures and surfaces. Melodic, sartorial, cinematic and abstract references abound, depicting a happy and uninhibited time with globalized impacts.

Self-taught, Aviwe Plaatjie was introduced to drawing by his mother as a child and joined the Good Hope Arts Studios collective where he developed his canvas practice. He also participated in the VANSA mentorship program, where he learned printmaking methods. In 2020, he was spotted by Ebony/Curated who coordinated his first solo show and presented him in London at the 1-54 fair. In 2021 he was exhibited by 31 PROJECT at Artissima in Turin.

Willow Evann, born in 1985, lives and works in Ile-de-France. A protean artist, he expresses himself through several disciplines. Coming from a home in Bondy and initially from the Ivory Coast, Willow Evann‘s creative practice revolves around his starting points and identity exploring African and French colonial history. As a dancer, he typically places his body at the center of his exploration and questions the changing image and economic well-being of individuals of color in Western social orders.

From the beginning, Willow Evann communicated the need to put himself forward through dance. Calmed in his childhood by the reggae to which his father was attentive, he immersed himself in the hip-hop culture from the age of 10. He then turned to Locking, this dance from the 70’s on the West Coast of the United States, today a fundamental reference of this movement.  Simultaneously, he developed his vocation as a photographic artist and focused his training on signal capture and choreographic movement. In 2019, he joins the Kourtrajmé school where he tests and advances his plastic language and participates the following year in the collective exhibition organized by the artist JR at the Centquatre.