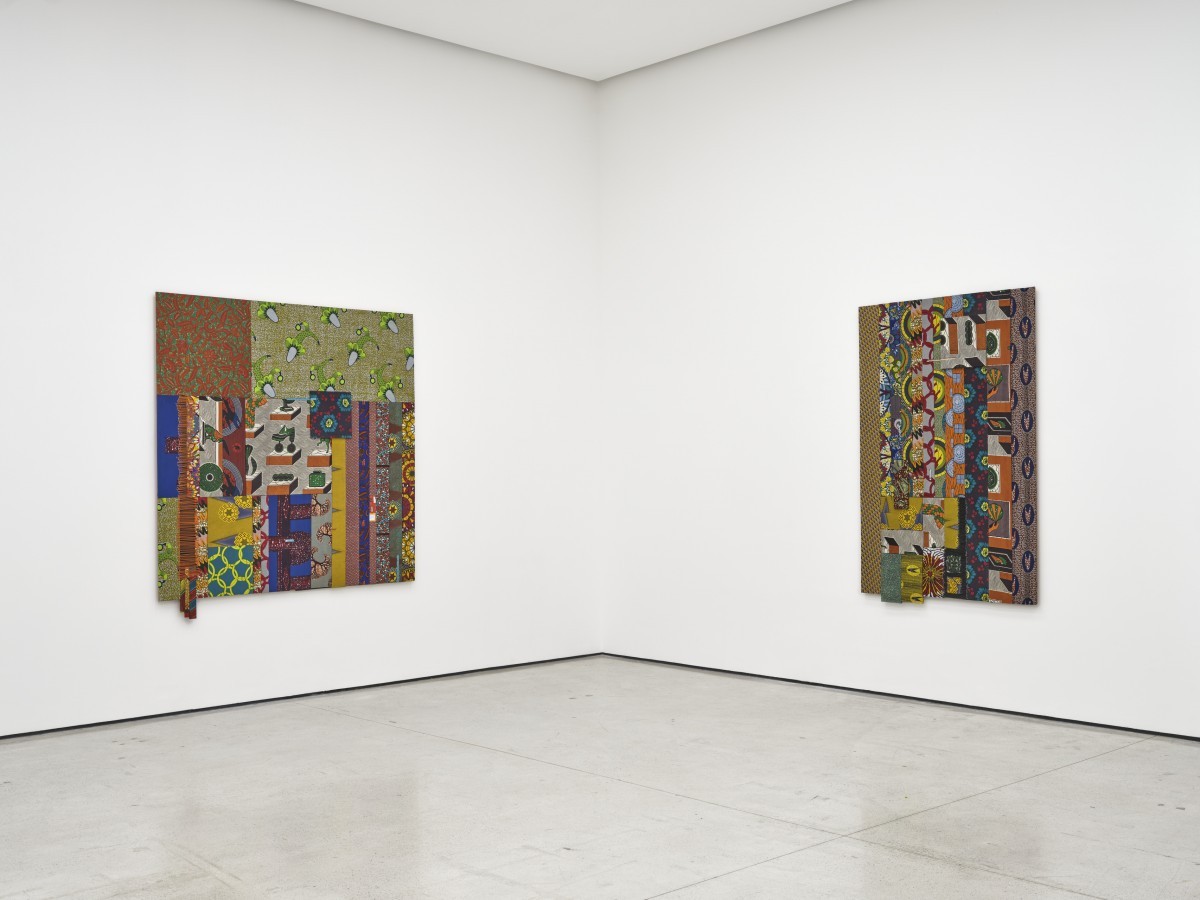 Presenting until May 14, 2022 at White Cube, « Half of a Yellow Sun », by contemporary artist Ibrahim Mahama, is his most memorable exhibition in Greater China that offers a selection of new paintings on fabric. A kind of new investigation in these works that join material history, trade and cultural identity.

The title of the exhibition is taken from Nigerian author Chimamanda Ngozi Adichie‘s novel, which revolves around the war between Nigeria and Biafra in the latter part of the 1960s, while the singular works are propelled by the 1970s tunes of pan-Africanist artist and political activist Fela Kuti.

For Ibrahim Mahama, this era of liberation from British rule across Africa has long been a source of motivation. An African story, with thoughts of opportunity beyond the tumult.

The sections of collaged fabric that make up these works were collected by him in the north of the country, in a process of exchanging new fabric for old from women traders, working in the markets of Ghana.

Known as Dutch wax, these thick, colorful cotton textures were originally made and traded by Dutch companies working along the West African coast during the 19th century.

Created for sale to the Dutch East Indian colonies, the textures, which incorporated the conventional Indonesian batik pattern, were efficiently manufactured at a lower cost than legitimate batik cloth. Be that as it may, these items were not appreciated by Southeast Asian customers, prompting Dutch merchants to seek other markets.

And it was while stopping to refuel in West African port areas that Dutch trading ships observed a commercial opportunity for imitation batik, which was modified to incorporate African-centric designs.

Dutch wax cloth eventually became inseparable from African plan and culture, often as a non-verbal method of correspondence inside normal wear and tear, or to indicate wealth, influence or impact in conventional settings.

Many of the motifs in Ibrahim Mahama‘s artwork have names assigned to their patterns and interpretations, for example: « Speed Bird » taken from the adage rich today, unhappy tomorrow, regarding how money can fly away, « Turtle » to imply confidence, strength and tolerance and « Eye » to imply that our bad behaviors will be seen anyway by the Almighty God. Another pattern includes a progression of trees organized in an arc, resembling the shape and surface of the mind. This pattern, known as « Kofi Annan’s Brains », was launched on the day the Ghanaian UN Secretary General gave his last speech in New York, which referred to his intellectual capacity.

Ibrahim Mahama is also interested in the political aspects of materials, and the kinds of work they require. In post-colonial Africa, these textures address a variety of public and private personalities; by uniting this large number of pieces, the contemporary artist can layer various chronicles, social sayings, non-literal and theoretical structures as an abstract and continuous feature regarding the traditions of colonization.

The improvement of this series is related with the burlap bag works for which Ibrahim Mahama is most popular. As an art student, he was interested in discarded fabrics from various markets in Ghana and building up an extensive archive of materials.

Due to the presence of jute, these materials eventually led to large-scale technical mediations. This ongoing series using wax printing tests, which he had incorporated into some of his previous work, including « Kwaku Minoona » in 2019 and « Chale Wote » in 2014, is the culmination of a methodology in which many remnants are compared and layered to create unique and unseen works. In some, the brilliantly colored seams between segments appear as if etched or written on the surface, while in others, the designs extend beyond the boundaries of the material edge.

Ibrahim Mahama first prepared himself as a painter and the choices made in these works – remembering the selection of textures, based on example and variety – he considers it to be somewhat the same as using paint on matter.