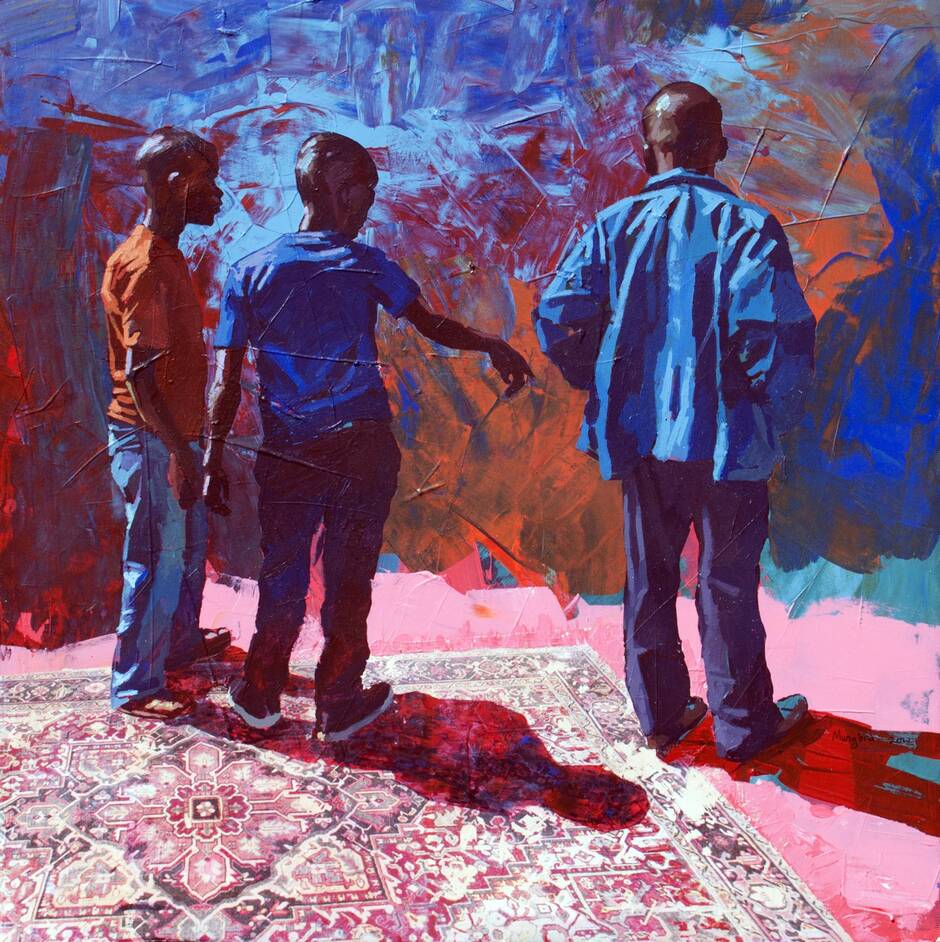 The Antoine DUPIN Gallery and the 31 PROJECT Gallery propose ” FRAGMENTS “, an exhibition considered mutually, which mixes plastic works of three visual artists from Africa and its diaspora.

Open until September 17, 2022 at the Antoine DUPIN Gallery in Le Buot 35350 Saint-Méloir-des-ondes, the exhibition “FRAGMENTS” proposes a discussion between Kelani Abass, Hélène Jayet and Elias Mung’ora, who approach their work as segments of a much larger and more complex picture, linked to the past, to memory and its transmission in the contemporary aggregated creative mind.

Each of these artists uses references gathered from verifiable works, period photographs, magazines or their own chronicles.

They question the creation of images, their place in our daily climate, the elaboration of a typical history from sections traversed by the visual abundance realized every day.

Discontinuity is at the heart of Hélène Jayet‘s work. An extension of her photographs, her drawings transform pixels into a progression of hand-drawn inkblots that populate her sheets abundantly, and reproduce non-existent scenes.

Hélène Jayet began her artistic education at the École des Beaux-Arts in Montpellier, then went on to study visual communication, photography and photojournalism in Paris. She has been making images and reports for the press for the past ten years.

Notwithstanding her imaginative work, Hélène Jayet exhibits photography and visual expressions in workshops in schools and colleges, and lately at the art and image branch of the Kourtrajmé school.

Her visual exploration begins with a research on afro hair, made in accordance with the experiences, her models having for normal point their African origins.

From images collected in historical books, photos or on the web, Hélène Jayet reconsiders, darkening her canson, point by point, until obscuring the first image, and forcing us to step back. An extension of her photos, this formation transforms the pixels of the prints into a progression of ink stains, which sometimes abundantly populate her sheets, and reproduce non-existent scenes. Reasonable or dynamic, these drawings are private. They follow in a vacuum the historical backdrop of a memory and a character well defined for her.

The chronicle is at the heart of the work of Kelani Abass. He uses elements from his father’s old printing shop in Lagos, photos, reports, typefaces… To make basic molds and process the paper in a staggered manner, collecting individual and mysterious statements from an earlier period.

Prepared at Yaba College of Technology in Lagos, Kelani Abass has exhibited in Nigeria and around the world. In 2020, he was chosen to present his work at the fifth Casablanca International Biennale. Kelani Abass has participated in a few residencies and studios, including Headlands Center for the Arts, San Francisco, California and Malt Air, Maltfabrikken, Ebetoft, Denmark. In 2022, Kelani Abass was a finalist for the inaugural James Barnor Foundation Photography Award.

The roads of Nairobi and the events of everyday life, for example weddings, markets or neighborhood parties, is the primary subject of Elias Mung’Ora. Through his work on variety and use of light, through the exchange of examples finishing the subject, Elias Mung’Ora depicts sections of pieces that place the people of the road at the center of a scrutinizing and beautiful world.

Elias Mung’Ora is an individual of Brush Tu, a Nairobi-based artists’ aggregate, and has participated in a few group exhibitions. He won the 2016 Manjano Art Prize in Nairobi and was named one of the ten finalists in the 2018 Barclays L’Atelier competition.

In this collective exhibition, the image then shows itself in its fundamental capacity to help fragmentary and different memory, that of the African continental mass, here changed, gathered by the hands of the artists to be found until September 17, 2022 at the Gallery Antoine DUPIN.