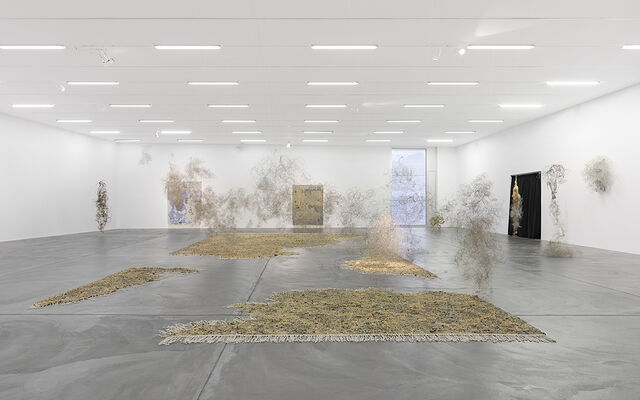 The Kunsthalle Zurich presents until May 22, 2022 « Kicking Dust » the first major exhibition of the artist Igshaan Adams in continental Europe. The exhibition comes to Switzerland from the Hayward Gallery in London where it was on view from May to July 2021.

Through the exhibition « Kicking Dust », Igshaan Adams offers a recreation area, a scene that assimilates and encompasses us with regularity, desire, counting and countless differentiations. He speaks of the beginning, religion, and sexuality and combines the general, the distant, and the seemingly problematic through his woven artworks, filigree sculptures, and large-scale structures that span opposing energies.

Artist Igshaan Adams with his creations spins strings, holds and winds sets of thoughts, as his art is dynamic, charming and simultaneously grounded in experience. His exhibition « Kicking Dust » assimilates visitors while leaving space and quiet for reflection and evokes a nursery or playground of apparent and undetectable paths, wishes and memories.

« Kicking Dust » follows paths through thick weaves that seem to meet each other. These routes depend on the paths made, impromptu, by the occupants of the Cape. Located on the border of Bonteheuwel and the neighboring township of Langa, these paths have been traveled for some time, despite a context marked by racial and strict aggression between the communities.

The artist’s specialty is not certainly biographical, it is neither non-literal, nor narrative, nor theoretical but incredibly illustrative. For him, the material is central: between rope, glass globules, plastic, wood or texture, which are woven into huge floor coverings or vast installations. Sometimes made by himself or assisted by women who have mastered weaving, which allows him to convey the thoughts and stories of others in his work through pictorial spaces and living installations that absorb us.

« Kicking Dust », the title of the exhibition, alludes to an indigenous South African dance the artist saw as a child among the Nama, her grandparents’ ethnic group, in the Northern Cape. Depicted as moving through the residue, the dance is a romanticized custom where dust storms erupt from the opening scenes where the performers kick briskly on the dry ground. Throughout the exhibition, cloud-like models made of spiral wire and globules float in space, reverberating the image of dust traveling from the earth. The kicking of residue can be seen as a moral story for work in general, as a movement that throws things up in the air. Dust is nothing, dust is everything, it is, like time, insignificant and fundamental.

Igshaan Adams lives and works in Cape Town, South Africa. His story is formed by the experience that a considerable number of things meet both in an individual, but also in social orders – many components that seem to be unrelated or seem to be totally unrelated.

Igshaan Adams was born in Bonteheuwel, an isolated township in Cape Town, created between 1961 and 1964. During racial segregation, blacks and coloreds – a collection of individuals of different mixed nationalities – were confined to areas of the city considered infertile and undesirable. As a Creole with Malay roots, Adams was put in the colored category. A practicing Muslim, he grew up with Christian grandparents, and as a gay man, he finds himself in an awkward position within that same religious community.