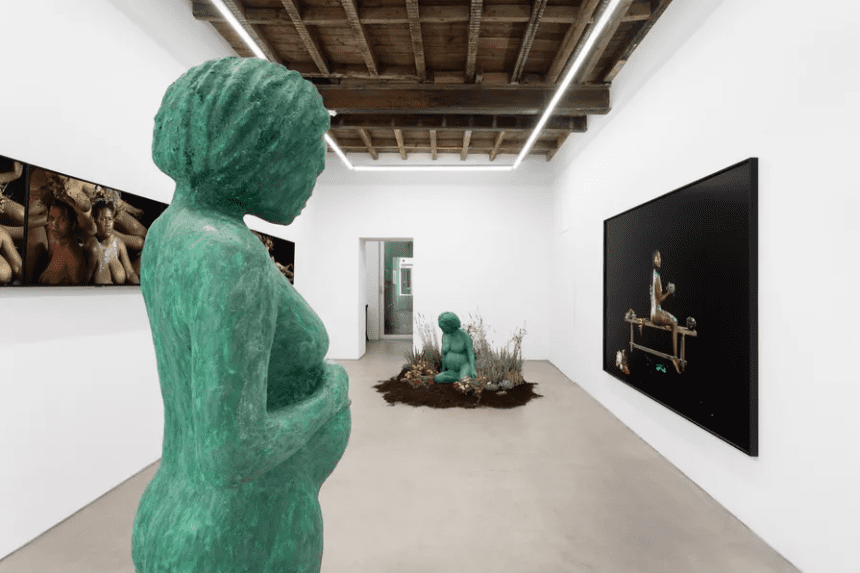 MADRAGOA presents the South African Buhlebezwe Siwani who offers her third exhibition through “Amanzi angena endlini” until November 12 in its premises.

“Amanzi angena endlini” is an exhibition that features two soap sculptures, a video and a photo, all of which nestle naked collections of proud individuals of color.

Buhlebezwe Siwani somehow returns to history, moving away from Renaissance chiaroscuro to depict dark bodies in her Amagugu video and Bageze ngobisi 1 self-presentation alongside what she calls indigenous materials (flowers, earthen pots, and indigenous medicines – no blame apples, of course) as well as allusions to the family soap involved by low-wage families in South Africa, it is stacked with oppressive social and class signifiers and variety – which have become a mark in her work.

In both the video and photo, the ladies’ gazes are held high, looking straight at the camera, in a calm but expressive gaze that is without a moment’s delay, delicate, threatening and tormenting.

The serious certainty of their looks is distinguished by the breeziness of their performances, their well-proportioned bodies and glistening skins, as well as the harmonies expressed by an ensemble of ladies in the soundtrack.

Sensible strength and excellence are emphasized by the presence of new and dried flowers embellishing the tops of the ladies or placed near them, while the smooth green cleanser implies a condition of constant transformation, from fluid to strong, as a representation of the changing flexibility of insight.

The cleanser is also the material for the two sculptures Zanobungcwele and Zanenkosi, each of which addresses a dark pregnant woman – the artist – either seated with her head down but grave, or standing and supporting her bowels with both hands. Unlike Rodin’s Masterpiece, the hero need not bother with his clenched hand and precise muscles to help him meditate; the mere fact of being, and holding another being within, is a bonus.

Buhlebezwe Siwani offers a delicate look at the bodies of these ladies as they shed their power of parenthood, femininity, and sisterhood in general, while addressing verifiable role models, the victims of colonization whose stories illustrate how individuals of color were treated, particularly people of color, to reclaim their bodies.

These individuals include Sarah Bartmaan, the so-called “Hottentot Venus” who paraded in freak shows in London and Paris in the nineteenth century and is today seen as the embodiment of racist and colonial exploitation; Krotoa, the seventeenth-century laborer who became the chief mediator of the Dutch colony in the Cape before falling into shame; the powerful Zulu ruler of South Africa, Nandi, and the controversial alcohol-paid ruler Nonibe, as well as all those who were overlooked as legitimate opposition warriors during the provincial conflicts of the eighteenth and nineteenth centuries in South Africa.