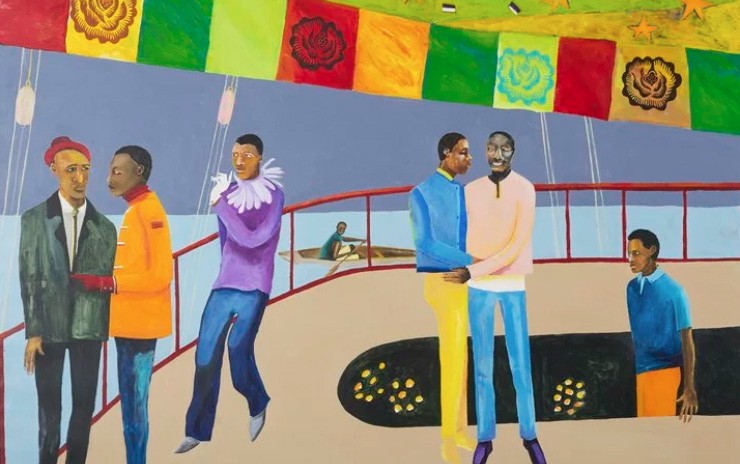 North of forty years, Lubaina Himid‘s strong and wonderful work has made her an undeniably powerful figure in contemporary art – from her critical work in the development of black British expressions in the 1980s to winning the Turner Prize in 2017.

Drawing on the artist’s advantage in dramatic art and her preparation in the design of the space, the exhibition will unfold through a succession of scenes that will put the guest on stage. Through a progression of questions posed throughout the exhibition, Lubaina Himid asks that we consider how climate, history, individual connections and struggle shape the lives we lead.

Featuring some 50 works that combine painting, everyday objects, idyllic texts, and sound, the exhibition will provide an opportunity to explore the breadth of Lubaina Himid‘s creation. Early installations, including the remarkable “A Fashionable Marriage” created in 1984, will be confronted with later works such as her series of huge configuration compositions “The Rodeur” created between 2016 and 2018, while new paintings made during a period of closure will be interestingly displayed.

An early interest in design, influenced by her mother’s vocation as a textile designer, has always been fundamental to Lubaina Himid‘s work.

A series of hanging fabric banners, powered by East African kanga materials, will invite visitors to the presentation at Tate Modern, highlighting verses that evoke the multiple purposes and implications of kanga, as well as its relationship to design.

Throughout his career, Lubaina Himid has explored and expanded the conceivable outcomes of narrative, allowing the viewer to become an active member of his work.

An important feature of the exhibition will be the presence of sound installations, including “Blue Grid Test,” created by Lubaina Himid in team with artist Magda Stawarska-Beavan. Presented in the United Kingdom, this 25-meter-long artwork features 64 patterns from around the world, each painted in a different shade of blue on different objects glued to the walls of the exhibition. Combined with a sound installation that layers instrumental music with Lubaina Himid‘s voice, the work forms a visual and aural embrace.

The exhibition will close in a set of paintings and painted objects, which focus on remarkable snapshots of everyday existence, rarely represented. The “Men in Drawers” series features delicate images of whimsical characters in classic wooden furniture, while works like “Cover the Surface” depict private collaborations and snapshots of uncertainty between men.

Lubaina Himid also continues to explore women’s imaginations in her new compositions, including “The Operating Table,” which places guests among a gathering of women in the midst of discussion and storage.