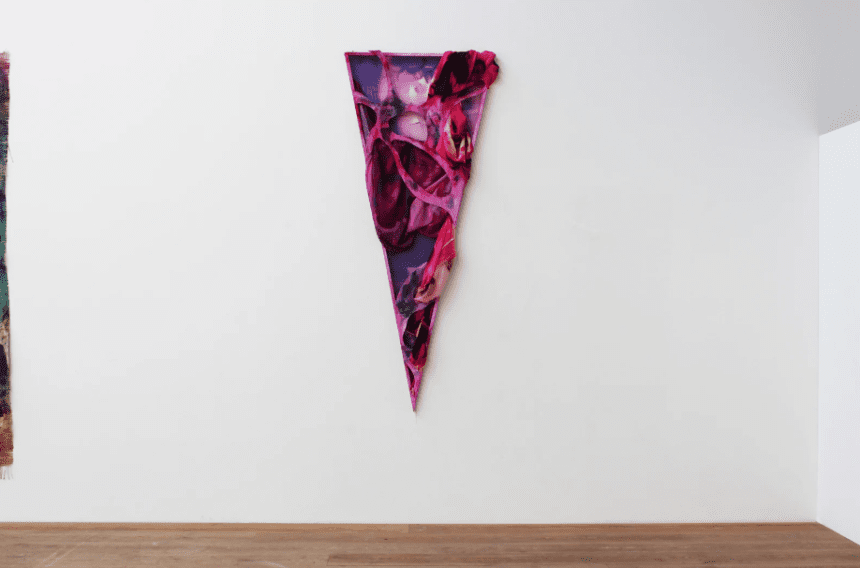 Although the origins of flags are obscure, a banner is usually characterized as a particular textural fabric used as an image, as a signage gimmick or for enrichment.

In “Oceans and Stars and Tulips“, artist Ambrose Rhapsody Murray presents through January 08, 2023, a body of work that aims to both recreate and dismantle our global view of a flag.

Each piece is a banner or a family crest. They are tributes and honorary images dedicated to the artist’s loved ones. These rethought banners, crafted from silks, various materials and wood, are combinations of swirling memories, family interconnectedness and black legacy building devices.

Some of the major banners made were made from Chinese silks in medieval times. By generally using silks for “Oceans and Stars and Tulips,” Ambrose Rhapsody Murray returns to the material beginnings of banners and the early economies of exchange. Through this cluster, Ambrose Rhapsody Murray examines narratives of exchange and expansionism between islands, as well as the extent of state power within its own framework.

Motivated by Lisa Lowe’s “The Intimacies of Four Continents“, this collection of works seeks to obscure the philosophical boundaries between what is public and private. By grounding the work in their own family histories and individual narratives, Ambrose Rhapsody Murray‘s flags expose the narrow limits of state power and obscure the supposed qualifications between surveillance bodies and the comfortable records of our private lives.

All things considered, the banners have been used as images of force for borderline developments of power, including on board shipments for sea correspondence. With this work, Ambrose Rhapsody Murray questions what their own banners might convey across the waters?

The banners presented to visitors appeal to a diaspora of individuals without borders. What might they convey to spirits that have never left the Atlantic?

Can these developments of symbolism, at some point, be signs of security?

Each work poses the question of belonging to an unguarded group, and shows how the relatives of slaves protected each other through customs of insurance and family production in the Atlantic world.

What does it mean here to organize around memory?

What does it look like, to make a character out of something delicate and shiny? Or on the contrary, to signal oneself to others through the mantle and remnants of memory? This collection of works finally has its place in an obscure custom of securing, protecting, or telling our own social legacies through art.