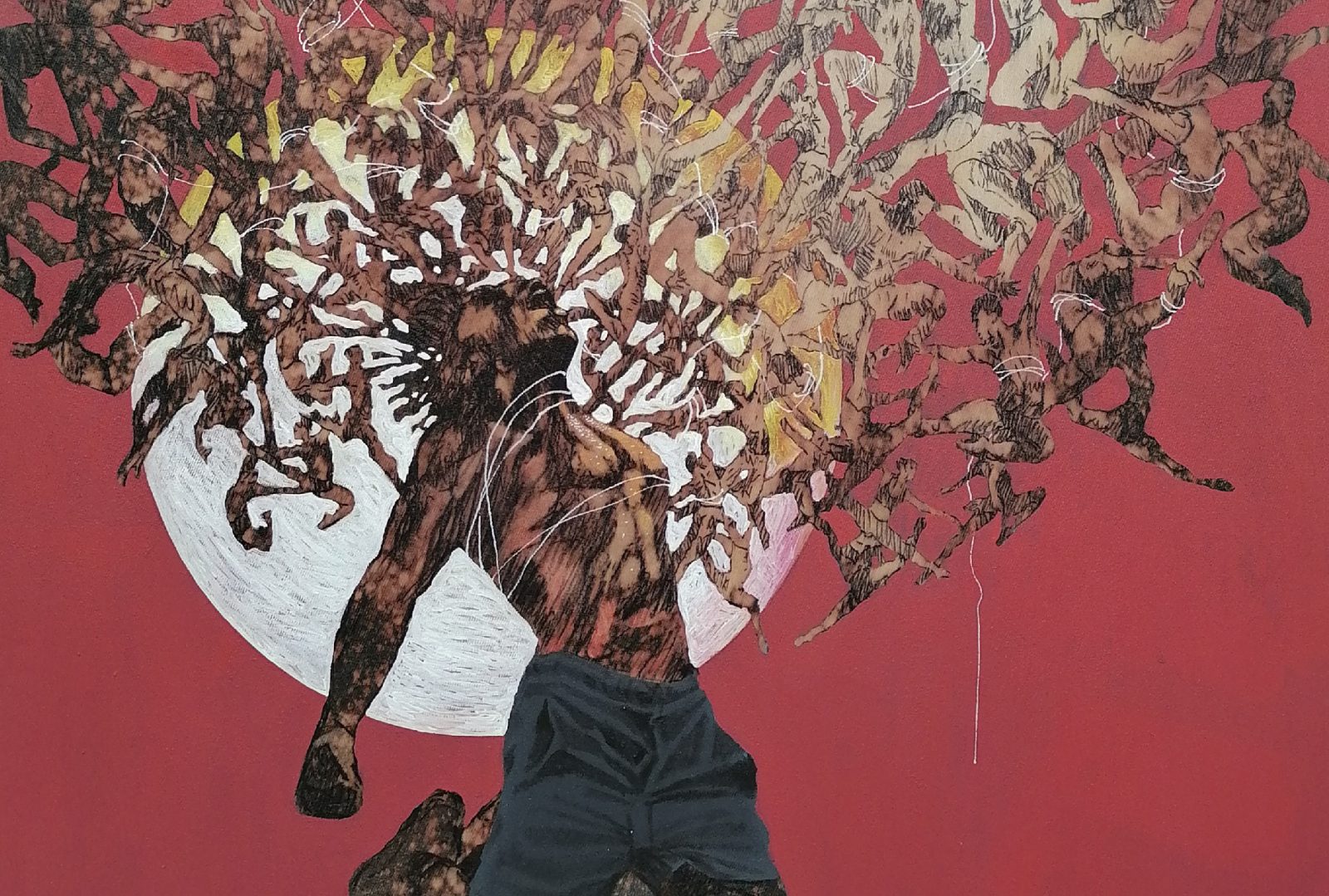 It is with the firm intention to stage this confidence in the social, monetary and societal improvement of Africa which is not yet an ideal world that the exhibition « AFRICA – LA RENAISSANCE EN MARCHE ! » is announced from May 19 to 29, 2022 at the Blaise Senghor Cultural Center coordinated by OBART in collaboration with ART KELEN and the collector Jeremy Cauden as part of the OFF of the Biennale of Contemporary African Art in Dakar.

The exhibition « AFRICA – LA RENAISSANCE EN MARCHE ! » will offer two studios of plastic expressions to children by artists in order to arouse vocations to the public that are totally distant, including children from modest families, visits to the Biennale of Dakar, a half-day of reflection on themes related to the African market of contemporary art, media, art venues and the role of states in the revitalization of the market in Africa.

The artists of the exhibition « AFRICA – LA RENAISSANCE EN MARCHE ! »

Pascal Konan, born in Côte d’Ivoire, stages the daily life of the occupants of Abidjan. He is the mediator of a specific penchant, that created by African urban communities by their opulence and the richness of sounds and smells that characterize them. His methodology is based both on the cult of a joyful youth spent in one of the suburbs of Abidjan, but also on the urbanity of Africa.

His mission is to understand the human spirit, which leads him to investigate the roads of the Ivory Coast in search of collective life, soul, which plays between what is available to the eye and what lies beneath. His work analyzes how humans are created through metropolitan cooperation and development.

Furthermore, Pascal Konan reflects on inner and outer lives using the relationship to space as a source of place ownership, where the African road serves as an analogy to a constantly developing character, where real private and public circles are not really compartmentalized into independent and static ideas.

Pascal Konan advocates through his works the individual activity to concretize humanism.

Born in Abidjan, Marie-Roxane Tehoua began to be interested in plastic media as a child and discovered clay as an exhibition medium. Then drawing and painting became her preferred modes of expression and allowed her to give free rein to her creative spirit.

As a young graduate in interior design, she uses clay modeling, which she learned on her own, to create still lifes. She also cultivates and learns the methods of pictorial creation, oil painting, acrylic and photography.

Yves Magloire Ludovic Midahuen as Midy is a pure product of the College of Arts, University of Science and Technology of Kumasi in Ghana.

He finds his motivation in the daily existence of man and the link he weaves with himself, with his fellow men and with his current circumstances. An irrelevant connection that MidY communicates through ethereal structures, characters going through the ordeal of life, intertwined strings, windows opening to others, countless inferences communicating the undecidability that lies behind the truth of his paintings.

His almost monochromatic range combines ochre and blue with infinite subtlety, ochre being the shadow of Africa and blue that of satisfaction. Opportunity and a manifest desire for receptivity guide the images conveyed by his works. The characters bring out a set of experiences that never cease to challenge society.

Mauricette Djengue is a self-taught multidisciplinary artist who has had an artistic enthusiasm since her childhood, an energy she indulges by visiting exhibitions, workshops and becoming a photographic model for some Beninese photographic artists.

The trigger to enter the creative practice came during the confinement where she tried to duplicate on her own face cosmetics seen on Instagram. It was quickly the accomplishment with the public and the media.

A year after the beginning of this recognition of her work on Body Painting, she chooses to put her art on the material through different processes. Her philosophical and imaginative methodology deals with the human condition through images of women, children, deities and ordinary circumstances of daily life that illustrate a commitment to ethics, societies and life in Africa. In her works, Mauricette Djengue offers elective treatments to repair the blows of life while calling the world to a true sense of humanism.

Born in Brazzaville, Punch Mak has set up his studio there where he develops his method, marked by the use of acrylic and, from time to time, oil paint.

Punch Mak brings an incredible attention to his stagings, in which the play of light plays an important role. He surprisingly addressed his country during the Jeux de la Francophonie in Abidjan in 2017, where he introduced his idea “Source de Lumière,” which was also shown the following year in a solo show at the Institut Français in Brazzaville.

Subsequently, Punch Mak advanced his work by presenting Chapter 1 at the Sahm Workshops in Brazzaville and then at the Dakar Biennale in 2018.

In March 2020, he entered a creative residency at the Blachère Foundation, coordinating his collection. In 2021, he will participate in the group exhibition at the Montévidéo Art Center in Marseille, for the Africa 2020 season.

Barely out of the Beaux-Arts, the world scene opens its doors to him. Mounou Désiré Koffi exhibited in Côte d’Ivoire, Morocco, Belgium, France and Switzerland and had several sales, notably at the Hôtel Drouot in Paris, at Piasa, Bonhams London and at Artcurial Marrakech…

The artist is becoming one of the main figures of contemporary Ivorian painting.

Passionate about drawing from an early age, his livelihood is evidenced very early when he won a competition while still in elementary school, his academic orientation is clear. After an artistic baccalaureate, he obtained the best result of his group and entered the Beaux-Arts. Mounou Désiré Koffi makes a happy marriage between impressionism and figurative art and attests to his own style by pushing the limits of painting with a touch as seductive as it is eccentric.

His flawless organic methodology is no less elegant; it offers unique reliefs and a beautiful look at the roads of Dakar or the Adjamé area in Abidjan.

From an exceptional youth, Soraya Gharib loves drawing and colors, assistant of drawing in architecture was her occupation in Dakar until 2001, year in which she moved to Paris and became enthusiastic about Arabic calligraphy that she repeated in the workshops of the Beaux-Arts of Paris.

It is only in 2012, that she starts working on painting as a secondary interest, but soon her thirst for painting makes her find an extraordinary energy covered in her since her childhood.

As a self-taught artist, she is not motivated by any painter and ventures to sample a hint of everything and be moved by what she feels like doing. Exotic varieties occupy a fundamental place in her work, as does light, which invites us to sublimate ourselves in an extraordinary air.

Soraya Gharib brings us into the universe of the theoretical where she interprets the radiance of the warm hues of ageless Africa: orange, red, yellow, the structures intertwine in an energy towards light or opportunity.

Born in Casamance, in the south of Senegal, El hadji Samba DIEDHIOU known as Baba DIEDHIOU is one of the sure values of photography and video in Senegal and teacher in visual design and advertising at the National School of Fine Arts in Dakar.

Guaranteed to have a beautiful vocation as a soccer player, destiny chose anyway a real car crash, he found, learned and started to communicate his thoughts through photography! His lens is first arranged on soccer before changing his plans and subjects. The selection of his subjects is a fixation on the soul, the gathering, without forgetting the magnificence…

Baba DIEDHIOU gives above all to his photos a utilitarian and socially useful aspect since they enlighten, challenge, shock, signify and bring admiration.