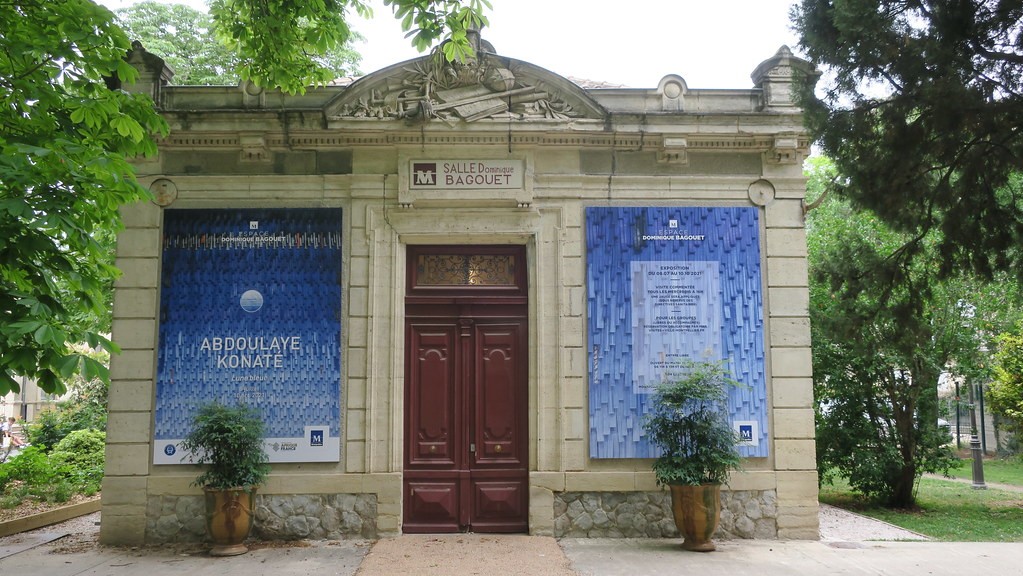 Known as an emblematic figure of contemporary African art, Abdoulaye Konaté invites himself to Montpellier by exhibiting his most beautiful creations at the Espace Dominique Bagouet, until October 10, 2021.

Organized as part of the Africa Montpellier in echo to the Africa-France Summit, the exhibition « Lune Bleue » of Malian artist Abdoulaye Konaté offers in the space his work « Les gouttes rouges », a monumental sculpture that pays tribute to the blood of honest people shed in the Sahel and elsewhere. The work is prompted by the grigri on the usual clothing of hunters in his region.

On the one hand, a moral story of expectation, the Tuareg Green with three circles illuminates, verifies and contacts the observer. The important work « Lune Bleue », borrowed from the Primo Marella Gallery in Milan, is at the opposite end of the spectrum from the two works and embodies the guarantee of an improved future. This cosmic wonder is of an extraordinary unspeakable quality, supporting the excellent element of the contemporary artist’s work.

At the heart of this exhibition, the unpublished work Homage to Joëlle Busca where the contemporary artist Abdoulaye Konaté respects the layer of obsession of his friend, weaving in the middle an impressive representation of Africa which she appreciated the subtle strength of this continent with infinite creative assets.

In contrast, with delicacy and humor, a weaving in blue and white Bazin resuming « la marinière intitulée » of Picasso to Jean P. Gautier.

Abdoulaye Konaté, this unusual artist who has made Bazin, a material with multiple creative potential, which is used in almost all his works as to maintain this link with his country of origin. He is inspired by the Korèdugaw of Mali, a local area of women dyers. In his work, he never ceases to tackle with gigantic works the problems of society and shakes up the conventional in order to allow us to open a window, on Africa, but also on the world in general.